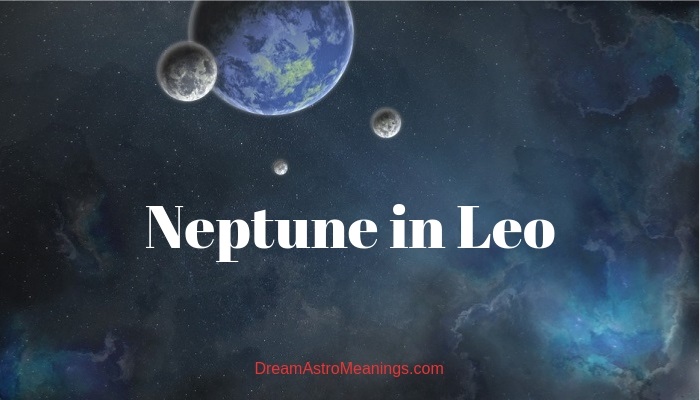 Neptune is the third heaviest and the fourth-large planet in diameter of all other planets in the Solar system. This planet takes approximately 165 years to finish a circle around the Sun. Its atmosphere is mostly composed of helium and hydrogen as well as ice, and its interior is mostly rocks and ice. It is considered very cold with a temperature of -218°C. It has 14 moons and Triton is the biggest of them.

This planet got its name from the Roman god Neptune, which was the god of fresh and saltwater. Neptune was equivalent to the Greek god Poseidon.

It is also the ruler of addictions, like addiction to drugs or alcohol. It rules alcohol and drugs, alcoholics and drug users. It also rules procrastination and procrastinating. Neptune rules perverts, bigamists, perversion, polygamy, bisexuality, scandals, etc.

The planet Neptune is the bringer of uncertainty and instability into a person’s life. This person creates illusions and false hopes. It makes us believe in things which don’t actually exist, except in our imaginations.

This planet gives people the ability to manipulate others, or creates people who are susceptive to being manipulated. It rules secrets, secret matters, secret knowledge, and things which aren’t discovered yet.

Neptune rules higher emotions and deep love feelings. It is the ruler of unrequited love and love illusions. It also rules art and all greatest artwork pieces. Neptune also causes confusion and lack of focus. It inspires spiritual evolution.

Neptune is a transpersonal planet, which means that it influences generations of people. It takes approximately 14 years to go through one sign, which means that people born during this period share the same traits.

This planet is responsible for changes in the society, especially regarding the matters ruled by the sign it transits through.

Many people who are under the influence of Neptune are very intuitive and have some psychic abilities. Some even have hypnotic powers.

They can also be very idealistic with a tendency to hide from their problems in an imaginary world which they have created. Many are prone to addictions which they use to escape from reality.

Many of these people are very creative and have great artistic talent with the ability to create real art masterpieces. They are usually very sensitive and able to sense what others are feeling. Some can even read people’s minds.

They are usually kind and ready to help. These people are often found in different kinds of charities and many of them devote their lives to help other people. Many of them are very spiritual and seek spiritual evolvement. They can sometimes be prone to criminal acts which lead them to jail.

Neptune rules confinement and isolation, and these people can easily spend a part of their lives in some kind of voluntary or involuntary isolation.

One of their main issues is their lack of self-confidence and courage to confront their issues. Most of them have a tendency of ignoring their problems and putting them under the rug in all ways possible, and often through some form of addiction, like drugs, alcohol, food, gambling, etc.

They have addictive personalities, and easily slip into the claws of some of them, or more than one. These people can also suffer from some kind of mental disorder and even mental illness.

Neptune ruled people are often interested in mysticism and the secrets of life. Many of them devote their lives to studying these areas and making them their occupation they make a living of.

To determine Neptune’s influence on a certain individual, it is important to consult the sign and the natal chart house it is placed in, as well as the aspects it is making with other planets.

It is also important to note the current transits and progressions and see if they make some significant connections to Neptune and announce some major Neptunian events occurring in a person’s life soon.

In this text, we talk about the traits of Neptune in Leo.

Men with Neptune in Leo can be prone to bragging and expressing their egotistic personality.

These men often have a magnetic influence on others, especially women, and appear very charismatic.

They love to be in the spotlight and the center of attention of other people, and people usually love being in their presence. They have a gift of entertaining others and can choose to do it as their profession.

Depending on the natal placement of Neptune in their natal birth chart, they can become famous musicians, actors, artists, or some other prominent public figure.

For their ability to appear in public and the influence they have on the masses, these men could be successful politicians able to gain supporters for their ideas with ease.

Women with Neptune in Leo are also very charismatic and can achieve a lot of success doing some work in public or in the entertaining business.

These women can appear dramatic and self-centered but are actually very kind and ready to help anyone in need.

They are often very creative and love expressing this trait in some form of artistic expression, like music, painting, or other art forms.

They love children and are often hopelessly romantic, although with badly placed Neptune in their charts they could experience a lot of disappointments and grief in their love life and with their children.

These women love to entertain, and people find their presence inspiring. They can be prone to showing off and bragging, but they usually don’t have a bad intention underneath. Like men with this placement, these women have a strong ego, and they need to express it in some way.

Some of the good traits of Neptune in Leo:

Some of the bad traits of Neptune in Leo:

People who have Neptune in Leo, often exude a royal and dignified aura, and they often inspire people to admire and respect them.

They can appear magnetic to the masses and this position could make a very successful actor, musician, painter, sculptor, religious or spiritual leaders, political leaders, and other public figures.

These people naturally draw the attention of people which puts them in the spotlight, and that is the place where they usually enjoy being.

They are a combination of mystery, energy, and passion, which often makes them irresistible. They love the respect and appreciation they receive from their surroundings. This can sometimes be interpreted as their arrogance.

These people can have strong ideals and ideas to improve humanity, and they can often be leaders of movements which promote such ideals. They are very romantic and love children. With badly placed Neptune they could experience disappointments in their love life or regarding children.

These people love performing and are often very talented. They are often in the movie or music business, where they manage to achieve admirable careers and get an adequate financial reward for their work.

They feel best when they are performing, whether it is in a theater, shooting a movie scene, painting or making some other form of art, performing in a music concert, etc.

People born with Neptune in the sign of Leo are usually born for entertaining other people. They grab the attention of everyone around with their natural talents. Even the ones who are not in any kind of entertaining business have this magnetic quality in their personality. They are optimistic and usually expect the best outcome of their actions.

They have a problem accepting disappointments and often need time adjusting to the new circumstances because they tend to ignore reality. These people are usually very sociable and love helping their friends and acquaintances. They are good at keeping their word and usually very reliable.

These people have the ability to make their dreams become their reality relying on their blind fate and belief in their abilities. These dreams are usually most people would consider impossible to achieve, but these people manage to do the impossible. They might be considered naïve and reckless by some people, but their relaxed approach and their faith in the outcome is what makes their desires become a reality.

In some cases, when Neptune is badly aspected in their natal chart, these people might be prone to taking risks and encounter great disappointments and ruin of their dreams because of circumstances that were unknown or weren’t anticipated, and in such cases, they could experience a mental break down they won’t be able to recuperate from easily.

These people can be prone to bragging and acting as if they are very important even when it is obvious to everyone that isn’t true. They have a strong ego and they have a tendency of expressing it in every situation.

They can appear pushy and prone to impose their opinion on other people and expecting them to be grateful for that. Because of these traits many people could find them annoying.

People with this Neptune placement are prone to idealizing famous people, musicians, movie stars, and people with charismatic personalities.

Neptune transits through different signs of the Zodiac influence generations of people born during the span of its transit through one sign. That is why it is considered a transpersonal planet. It takes 14 years for Neptune to transit fully through one sign.

Its influence is seen through global movements, changes in perceptive regarding the matters ruled by the sign it goes.

When we determine the influence of Neptune on a certain individual, we should always consider its placement in a house of the natal chart as well as the aspects with other planets. Current transits and progressions are also important.

People with Neptune in Leo usually have charismatic personalities and have a magnetic influence on others. They have a talent for entertaining people and often choose a career related to the entertainment business.

Many of them have a strongly developed ego and are prone to bragging about their accomplishments.

They are very optimistic and always expect the best outcome of their actions.