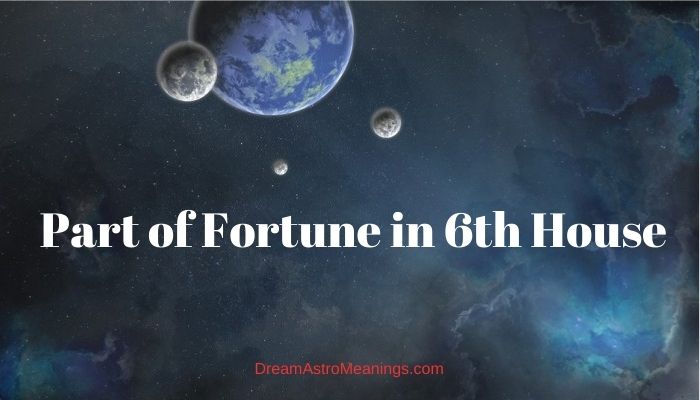 It is necessary to know that the benefits of the Part of Fortune depend mainly on the position of the signs or the Houses.

It is possible that you have already searched for Part of Fortune on google and you may have been confused when the algorithm mixes Wheel of Fortune with astrological tags.

Normal, I suppose that everyone at the beginning of their studies has already confused the damned wheel of fortune, which is a tarot card with the astrological Part of Fortune. (Or with Silvio Santos’ program on SBT, if you don’t know anything about astrology or tarot yet – laughs)

If you know a little bit of English and have watched I want to be great, you may have met Zoltan, the great gypsy who can look at your luck and make your wishes come true.

This is how Josh, a 13-year-old boy becomes an adult after having his wish fulfilled.

In English, luckily, it comes under the name of Fortune, which is much clearer and closer to Fortuna, the part we are about to know.

And what would that part (or any part, as far as meaning in general is concerned), anyway?

Would this Part be able to open the doors of perception to our desires? Would we have an enigmatic Zoltan within our birth chart?

The astrological structure over the years is refined to make sense of points of observation of the sky.

That is why we rely on relations of virtual points from the movement of the planets and the sun and moon in the firmament.

There is a particular geometric relationship that contains a philosophy to explain its meaning on the birth chart. This relationship concerns the Parties.

The Part of Fortune is the relationship of the path traveled between the Moon and the Sun when projected on Earth, or at the point of the ascendant.

This image unfolds in several others. I’ll explain.

My mother is a great cultural reference in my life, she introduced me to Mists of Avalon, for example, and it was also with her that I watched a film called Brother Sun and Sister Moon, a narrative that tells the love relationship between Francisco de Assis and Santa Clear.

Casa 6 represents our concrete and practical knowledge, the adjustments we make throughout life, our sense of improvement and our ability to deal with adversity.

It is also associated with purification, our ability to work and routine service.

It is our way of self-improvement, how we deal with criticism and self-criticism.

It shows how our work environment works and the quality of our relationship with professional colleagues.

It does not symbolize our career, reputation and social projection, as these are themes of Casa 10, but rather the daily work, the act of serving and the service properly said, things that make us learn through experience.

It governs tasks that we often don’t like, but we need to do to keep the gears of our personal machines running smoothly.

In essence, the sixth house is a place of routine, of daily life, that provides us with good nutrition for each day and that prompts questions such as: “What will we do and how will we act with our disabilities?”, “How will we react to of crises and everyday problems? “

Your analysis can give clues about a person’s routine and whether he will remain strong and whole or not around these and other issues.

It was known as the home of slavery in earlier times. It is a falling house, considered one of the “evil houses” and in the past, it has been called “the house of bad luck”.

Over time it has been associated with a number of unpleasant things such as exacerbated servitude, hard work and illness.

It is commonly referred to as one of the so-called “complicated houses” on the birth chart, along with Casa 6 and Casa 12.

Nowadays, it is usually associated with the role of health (or lack of it, which may show problems and physiological conditions) and work.

Pets or small ones are also part of the scope of the sixth house because over time they have always been used as ways to help Humans with their services, such as hunting and guard dogs, for example.

As for the meaning of health, while the first house refers only to physical health, the sixth is a complete set that deals with physical pain, ability to heal and various problems that affect our perception of the world on a daily basis.

It is important to mention that bad times, different problems, diseases and setbacks are part of the cycles of our existence.

The way we deal with such situations is what shapes us throughout life and defines part of our personality.

It is a house of modesty and achievements for the well-being of others, which teaches us where to find our limits and the balance between serving and being served.

It is linked to the disciplining of the ego, something that generates humility and shapes us to live better in society, helping us to function better and to integrate more naturally and in an orderly way with the world around us.

It is in the sixth House that we begin to better recognize our limitations and our desire for self-improvement.

With that, we are able to realize that our well-being can only be achieved through genuine discipline and humility.

Part of Fortune in 6th House – Meaning and Symbolism

Analyzing this sector of the map, we can see the quality of our daily organization, including meals, sleep patterns, things related to health and physiology, meeting schedules, personal hygiene, schedules and our attitude towards daily responsibilities.

It talks about cares (especially those we have with ourselves every day) and connects us to Earth in a very practical way, through little things in life that need to satisfy and sustain us.

Depending on the planets that interact here, challenges or benefits can occur.

If there are maleficent planets at work, your health and work may be affected and problems such as workaholics, hypocrisy or orthorexia can happen.

Already with good planets in transit, it suggests that there is more balance in the mental, physical and spiritual aspects of life, also influencing a greater desire for self-healing or the gift of healing other people.

It governs several seemingly distinct themes, but which are actually deeply related, such as health, illness, work, personal improvement and duties.

I will take advantage that the analogy has already been addressed and speak about the obviousness.

São Francisco-Sol is the virtue of the spirit, the ability to mediate divine intelligence, while Sister Moon is the one who reflects and follows the journey supported by the path of the Sun.

Leonardo Buff, theologian and professor of philosophy and religion, in this beautiful text tells us that a witness arrives for Clara’s canonization and says that Francis to her “seemed to her gold so clear and lucid that she also looked all clear and lucid like a mirror”.

And this is exactly the relationship of the Sun and the Moon in the movement that we observe in the skies: the moon, or the soul, prints the virtue of the sun, the spirit and reflects it, and becomes sensitive to that light, or the lack of it to as she is further away or closer to him.

In our daily lives, we are always at the service of those in need, even if that person is ourselves.

As there are always things to be done, clothes to be washed, routines to be performed, hygiene to be taken care of, items to be repaired and services to be provided, analyzing the sixth mundane house gives us an indication of the quality of these common actions.