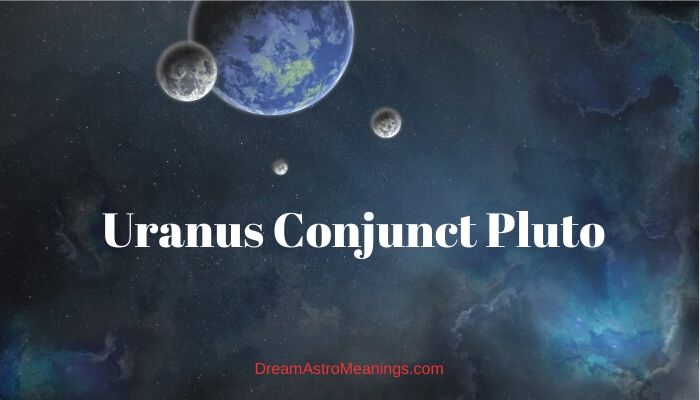 Astrology of relationships is probably the most popular part of astrological analyzes. It is not a modern phenomenon.

Ever since the astrology was invented, people have been asking their star-scholars about what the heavens might have in hold for them, especially in terms of love, marriage, children, finances et cetera.

In old times, however, astrology and astronomy were the same science; they were divided much later in history.

When it comes to astrology, many would talk about it as of a science or, more precise, the science of the stars. While it is what the term translates to, astrology is regarded as a pseudo science.

Nevertheless, many people would still turn to astrology in search for answers official scientific disciplines cannot offer. Such one is the question of love relationships, for example.

Comparative astrology or synastry is what we are interested intro. Uranus conjunct Pluto in synastry represents a specific ‘touch’ to one particular relationship.

Synastry does not necessarily have to involve two who were in love or potential lovers, but people are usually interested into the romantic synastry.

What could it offer? What could comparative astrology reveal?

Astrological aspects are specific kind of contacts between planets in a natal chart or between natal charts. They are angles planets form with one another.

There were five major aspects, commonly said to be traditional aspects. They could be easy or heavy, meaning that they, either way, create a specific dynamic between planets.

In synastry, they would tell much about the energies between two natal charts.

It is very difficult to take astrological aspects in comparative astrology in a stereotypical way, since each synastry would present with a complex of aspects and a complex of relations between those charts involved.

When observed isolated, an aspect cannot tell about the actual outcome of a relationship.

Well, no synastry analysis guarantees the relationship would work out or not.

However, synastry report could be of great value, since it could explain why the relationship develops the way it does. It gives a fantastic insight into things you might not be aware of.

We could say that a synastry report does not predict the actual course of a relationship, but it definitely tells about the relationship.

One would of course love to see favorable aspects, that is, the trine and the sextile, in synastry.

However, it is virtually impossible that all aspects are perfect; the dynamic of a natal chart alone, just as the dynamic of two charts interconnected comes from the complex of both kinds of aspects.

Do not let heavy aspects discourage you; they are to be taken as challenges.

The aspect of conjunction is the trickiest of all aspect, since its nature is, to say, mutable.

The conjunction aspect could be understood as easy or heavy, depending on the planets involved within the aspect.

The thing is that this aspects represents the angle of 0 degrees, ideally, meaning that the planets’ positions fully match or that they were very close to one another.

Many claim the conjunction was the most powerful of all aspects. Sure, it must be strong, since energies of the planets are combined and conjoined.

The conjunction intensifies the energetic flow; it amplifies the characteristics of the planets.

Therefore, the very nature of the planets that stand in the conjunction would determine if this aspect is going to be favorable or not.

In our today’s synastry, we have the mighty, rebellious Uranus and the quiet, powerful Pluto.

Let us first meet Uranus and see what this planet represents, in mythology and astrology, so better to understand its role in synastry.

In ancient mythology, Uranus was the god of the sky, one of the primal deities. He was the first ruler of the universe, after the original chaos.

Uranus is the first to transcendental planets, according to astrological classification of the planets. Uranus represents the beginning, originality, invention, uniqueness.

For Uranus, everything must take place here and now, while the planet boldly looks into the future.

Uranus is considered a herald of future, of progress, innovativeness and of destruction of the old order.

The symbol of Uranus signals the power of the creative mind to raise our spiritual self to a higher level.

Uranus is associated with everything new, modern, original, experimental, risky, and eccentric. Uranus is in favor with productions of time, with discoveries, inventions and old enterprises.

All major revolutions, rebellions and similar events are associated with its influence.

People who are interested into unconventional things, occupations out of the mainstream, eccentric and ingenious thinkers, all are children of Uranus.

Uranus has a great potential for rebellion and radical changes.

In synastry, we could say Uranus represents instability, seeking for freedom and independence. Uranus does not want old frames and tradition.

Pluto represents the silent power, associated with the ancient deity of the underworld, Greek Hades, known as Pluto in Roman mythology.

Pluto was not a favorite god, obviously, but he was not considered an evil deity.

People thought of him as just, merciful towards good people, though somber, unfaltering, and cold.

Everyone would eventually end up in his dark, gloomy kingdom, so people would be careful not to invite him earlier. Ancient Greeks would often avoid saying his original name aloud. In any case, Pluto was a powerful god.

The planet Pluto bears resemblance to its mythical counterpart. Pluto is the last of the transcendental planets and the higher octave of Mars.

It is believed that this planet has an immense energetic potential, one that could bring great power and influence, but also the unbelievable destruction.

Pluto is the planet of transformation, of silent power, of manipulation, obsession and of carnal power, as well. Its power is mysterious and under skin.

Pluto rules the sign of the enigmatic Scorpio. Pluto is the planet that also carries the incredible power of regeneration.

In synastry, Pluto is associated with fi9xation, possessiveness, obsession and transformation.

As one could easily assume, the way this energy is going to manifest would affect the relationship in a specific way.

Usually, it is considered distant and slow planets would not affect natal charts much.

However, if they form strong aspects or are in a prominent place, their influence would be felt.

What do we have here? A planet that is all about freedom, independence and innovation and another one that wants to possess, to transform and influence. How do Uranus and Pluto correspond in synastry?

Both of these are not the followers of tradition, each in their own way. Both think deep and are original. Both of these want to set things in motion, one way or another.

Uranus conjunct Pluto in synastry awakens this need not to settle down; it offers amazing possibilities to experience the world together.

This relationship would not start with a small talk.

The energy of this connection would be difficult to predict; other aspects would play an important role in deciding whether you two would be compatible or not.

This aspect alone could infuse compatibility with incredible originality.

Your individual need to get out of the frame and leave the well-treaded mainstream paths would be intensified within this aspect.

This could make you a wonderful duo of two powerful individuals who respect one another, attracted by this bold energy and give you the sense that you two could change the world.

Some authors say that Uranus conjunct Pluto in synastry does not tell much about whether the relationship is going to work out fine or not.

The best is not to build up any expectation, that is, do not set expected outcomes.

Since these planets are both pretty stubborn in their ways, but could magnificently work together when in synastry, just let them work.

Uranus conjunct Pluto would definitely paint your relationship in an unusual, not often seen way and would probably make the relationship the most original and unique of all you have ever been into.

In conjunction, these transformative energies well combine, but other aspects would decide if it was good for you two.

This aspect would most assuredly lead you out of the well-set traditional frames. You do not want to be a couple like all others.

Depending on your individual charts, this characteristic could be manifested openly or quietly; either way, you do not think about your relationship as a common one.

This unconventional duo fights the tradition and sets up new frames.

You will see where this incredible energy will take you. Uranus is usually considered an unstable element for a synastry, while Pluto is the one that brings in possessiveness.

However, in the conjunction, these characteristics are not likely to be dangerous, as they could be in an opposition or a square. We could characterize this aspect as unpredictable.