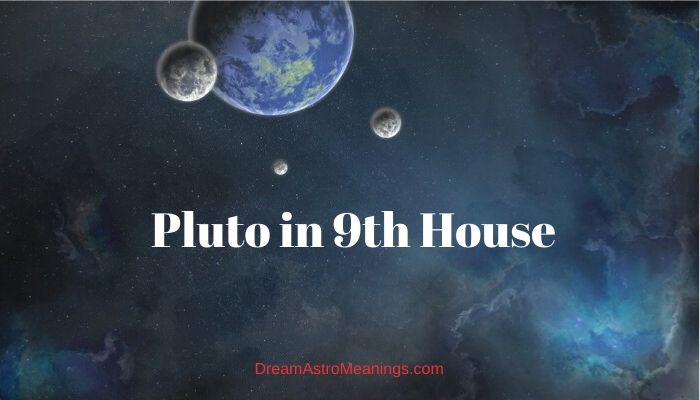 Natal astrology is a complex field of interest and there is much that should be taken into consideration if we were to understand the messages from the stars.

Astrology is as old as human civilization was old, even older, as some researches suggests. It has been discovered that even in prehistoric times humans were aware of the fascinating connection between the cosmos and the life on Earth.

Natal astrology, however, deals specifically with the influence of such cosmic forces on the life of an individual person.

The native’s life is reflected in the natal chart, a diagram the astrologer creates, based upon the date, time and the place of the native’s birth.

The Ninth House is an interesting, intellectual field. It is one of the cadent houses and cadent ones were analog with signs of mutable qualities.

As such, the ninth field was analog with the fiery, adventurous intellectual Sagittarius, always on the quest for knowledge and new experiences.

The key term related to cadent houses was learning; these houses were about the exchange of thoughts, observations and principles, their distributions and acquiring those all, of course.

As a Fire house, the Ninth House has to do with the concept of identity and the attitude towards the life as it is. As such, the ninth field has much to do with the native’s experience of the world.

This is the house of philosophy and the house of distant lands, foreign, far destinations that attract the native, calling him or her to get on the road and pursue knowledge in the wide, wide world.

The Ninth House represents the road of spiritual learning, the philosophy of life the native establishes for him or herself. This spiritual and philosophical journey and growth is typically linked with travel.

The native learns the most through travelling, often going very far from the home country. This is a very interesting concept of learning about life and eye opening.

Sometimes the Ninth House could be understood as an overture for the next stage, the next setting, the Tenth House, which was the house of success.

Well, the acquired knowledge, precious and interesting and often fruitful connections, contacts and collaborations with foreign people could contribute to the native’s overall success in life. However, it is mostly about the attitude and the worldview.

The worldview the native have shaped up in the ninth field would definitely affect the next one. The Ninth House has to do with education, especially with higher education, with one’s willingness and desire to learn, with intellectual enthusiasm, so to say.

Through the ninth field, the native grows and thus opens up new doors to success.

The House of Learning

Therefore, the ninth field indicates professional success, as related to the concept of learning, education, improving skills and knowledge.

This house indicates opportunities that come with knowledge, the way the native could succeed by using the knowledge.

Since we have mentioned travels to distant countries and contacts with foreign people, let us look on it through a professional growth prism.

The Ninth House indicates business contacts with foreign countries and jobs that rely upon it, such as export-import business, international commerce and such.

In addition, this house is also associated with the ability to influence wider audiences especially through a written medium; through writing and publishing, for instance, which also has to do with the concept of education.

People who have an emphasis on the Ninth House have a constant and a very strong desire to grow as persons, intellectually, spiritually, philosophically.

They are very open minded and willing to learn new things, in order to learn about themselves, as well as about the world they live in and people they walk amongst. They were natural born explorers and researchers.

Not only they seek for general knowledge, but they are also interested into spiritual matters and spiritual growth and development.

Often their life experiences, typically those that come through travel, would greatly affect their principles, philosophical points of view, attitudes towards systems of value, spiritual beliefs and else.

In general, Ninth House is an interesting field that overall indicates all kind of opportunities. Astrologers take it as a beneficial and a fortunate house.

An interesting fact about the Ninth House that should not be overlooked is a bit negative one, depending on the chart, of course. This house indicates potential problems regarding romantic relationships.

This house is also associated with the divorce and the second marriage.

Well, maybe it was exactly what the native needed to be happy in life. In any case, let us discuss Pluto and then see how the mysterious planet feels in this fortunate house.

Although Hades and Pluto do not have exactly the same character, they represent the same mythical figure.

Pluto was the god of death, but also of abundance and wealth. He ruled the afterlife and was merciful towards good people.

People did not exactly worship the god of death, but he was respected, being strict and a just god.

He also ruled the riches of the earth, such as precious minerals, as well as layers of the earth needed for a good harvest; hence the association with abundance.

Pluto, as an astrological planet, has many negative and positive sides, which could be said for most of the astrological elements.

Although some would associate it mostly with kind of a dark influence and even consider it a true malefic, Pluto has incredible potentials that could be taken both for better and for worse. The ruler of Scorpio, along with Mars, Pluto is also the higher octave of the latter.

This planet represents transformative processes and by that, we mean inner, personal transformation. This is one of the collective planets, meaning it is associated with the impersonal, along with Neptune and Uranus.

It relates to all the abstract concepts that lie beyond the personal, beyond the conscious, tangible and easily visible. Pluto is your deep transformation.

Pluto represents the darkest parts of the self, the animalistic in the human being, impulses we could even be afraid of. This planet is associated with the physical desire and impulses, with potency, with power and dominance.

Possessiveness, jealousy, the need to own and control are all associated with the powerful Pluto. In that sense, Pluto is a dangerous planet of dangerous people.

Criminals, mafia, spies, mages, terrorists and all sorts of those we could consider deadly and dangerous walk under Pluto’s banner.

However, that was only one side of the coin; Pluto is also the planet of healers and surgeons, detectives, police, political figures, secret societies and organizations.

As you could probably see, it has to do with power and influence over others. In what way would the native use the power, it depends on the chart.

The Planet of Transformation

In addition, Pluto is also the planet of wealth, as it is associated with riches that lie beneath the ground, just as Pluto, the god of the underworld, also ruled riches of the earth, precious minerals and else.

In that sense, Pluto is the planet of power coming from material through resources; power through possessions and else. It is associated with high positions, powerful influence over people. It could be inspirational and noble leadership, but it could also be merciless manipulation.

On an inner level, so to say, this is the planet of transformation, which requires facing your own inner demons. Everyone would rather avoid that and resist, but Pluto, if you have it dominant in your chart, would not let it pass that easily.

The more you resist, the more trouble you are likely to experience from Pluto, which would put a black veil over your life, until you resolve your inner struggle. However, this is, indeed, a path to self-awakening and rebirth.

In that sense, Pluto would make you feel as if you were born again; it would lead you to enlightenment. Just like the mythical Phoenix bird rises from its own ashes again and again, you will feel reborn.

Pluto eventually releases of all the tension and blockages and helps you rise again.

People with an emphasis on Pluto are incredibly regenerative, even if they have the tendency to fall very law.

Pluto in the Ninth House – Pluto in 9th House

People with Pluto in the Ninth House are bound to their convictions and beliefs.

They are highly unlikely to change their opinions and they would passionately defend it. They are excellent debaters, but their zeal over subjects they deem important would easily turn it into a conflict, if the native were careless.

These natives have a tendency towards zeal and fanatic attitude. They generally stand firm about what they believe in.

They are not blindly faithful, because these people are intellectuals; they are very interested into learning, research, exploration.

Their mind is a mind of a researcher, very insightful, diligent, but it must be said, passionate about it, which could make them hotheaded and stubborn when it comes to clash of opinions, beliefs and convictions. They themselves show deepest disdain towards those who blindly follow.

They gather knowledge, explore it and experience it, before they actually commit to something. They would never accept something simply because it sounds attractive.

Ideologies, philosophical paths and religion are of great interest to these natives. They dislike inconsistence in beliefs and they are on a quest for finding something to believe in.

People with Pluto in the Ninth House are adventurous and they enjoy traveling. Travels would probably bring them the most intense experiences in their life, the most transformative processes, thanks to the mighty destroyer Pluto and its equally powerful regenerative energy.

In addition, Pluto would make such travels unique, it would lead you to places and into cultures not many would ever see.

They enjoy teaching others and passion on their knowledge of the school of life. They would never share their ideas and tech lectures carelessly, without carefully thinking through them.

They have to believe in what they speak; otherwise, they would not share. This is a good thing, since it makes them quiet impossible to bribe.

On a bad and possibly the worst side, they could become too imposing with their own ideas and opinions.

Not only that they would refuse others’ beliefs, ideologies ad philosophies in their own zeal, but also they would do everything to make others opt for what they believe in. Well, a two-sided blade.

These natives are persuasive, creative and convincing in expression, often very charismatic.

However, they should remind themselves that others’ opinions count. While in general, their way of life and general view on the world, teaches them tolerance and openness towards the different, in their most zealous moments they tend to neglect it. It is not something beyond repair.

Pluto in the Ninth House offers the native amazing opportunity to influence others.

Take it for your overall good causes, which are the causes of spreading knowledge, above everything else.