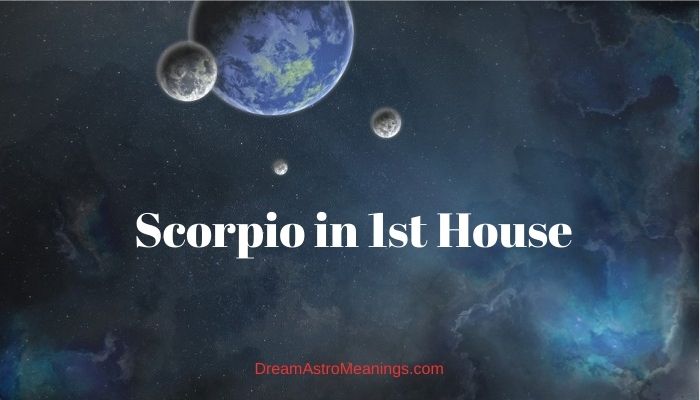 This is the myth of Orion, the hunter, who surprised Artemis naked in his bath and wanted to rape her. She brought out a scorpion which stung him in the heel. To thank the arachnid, it was transformed into a constellation.

Symbolism and character: In the zodiac, Scorpio symbolizes death, the end of things, transformations and sexuality.

It represents instinct, passion, animal and sexual desire, as well as all that is destructive in human beings.

Extreme, tyrannical, excessive, he likes to break in order to rebuild according to an ideal of purity: He can become sadistic, violent, jealous, resentful and vengeful.

The Scorpio is whole and loyal, he grants his affection without limit, on the other hand, beware of who would abuse it, there would be no place on earth to hide him from his revenge: He does not forgive weakness and pettiness.

Secret, complex, manipulative, liar, he is difficult to understand because he hides an affectionate and loving nature under his violent surroundings. He is entirely animated by violent emotions which shake him like convulsions and transform him into ardent desires and violent instincts.

He would like to dominate himself with his intelligence and his reason, but he fails, because his energy is made of birth, death, metamorphosis, it cannot be controlled. Scorpio is an idealist who needs to devote himself to a just cause.

His sensitivity is so great that he is the first to attack, anticipating external hostility: He is capable of a lot of aggression. Determined, willful and relentless; He doesn’t let go until he’s done: He works hard and gives it all. Stubborn, we do not change his mind and he is anything but weak: He wants to dominate and lead.

If there is a disagreement, it is better to give up the game and avoid pushing him to the limit: he is unable to stop and will fight until “death” on the other. If you betrayed him, run away! He holds the record in the various facts.

In love, he is passionate, magnetic and jealous. His love life is often complicated and you might even think that he shuns simplicity. He has a need for power, for the absolute and for possession over the other: He wants to merge.

He loves to challenge morale and come across as transgressive and without taboos, especially sexually where he seeks to experience as much as possible. He cannot stand the Luke warmness of feelings and prefers to create a psychodrama rather than live in flatness: He is whole and can only conceive of love or hate.

He has a reputation for being an extraordinary lover who uses his power by controlling the pleasure of the partner: Scorpio possesses the other.

More sentimental than he would like, he becomes attached and over time pacifies himself and makes a loyal and protective spouse: He has a sense of family and adores his children.

The House 1 of the Ascendant is your Personality, it corresponds to your displayed character, what people perceive of you, the social veneer that you let appear, your appearance (part of your heredity with the House 4), your temperament turned to the outside, your daily active vitality (see Ascendant Complex for more details and the difference with the Sun).

It is your ego, your individuality, the deep individualism, in the process of Individuation it is the “I” which is built in opposition to the “Others” (represented by the House 7 attached to the Libra), the conscience of oneself as a separate entity…

The Sign in House 1 is therefore considered your Ascendant, it colors your personality with the corresponding archetype of consciousness.

Unlike, your Sun sign indicates your will, your “deep self”, your “deep vitality”, your free will, in short you’re ideal to be achieved throughout your life, for believers it is the archetype of consciousness. Of the soul, what you radiate once the surface layers have been removed…

The Ascendant and the Sun sign will therefore nuance each other according to the evolution of the personality of the native.

The harmony or dissonance between Ascendant and Sun sign is interesting to study in a birth chart because it gives clues to interpret certain situations. House 1 and House 10 are essential for understanding character and getting an idea of ​​fate.

It informs us of the “earthly” or “worldly” personality of the native, that is, of his external appearance or the way others see him. The qualities of the Ascendant sign are qualities that the person adopts to adapt to the environment.

If the sun sign tells us how the native is internally, the ascendant and the first house tell us how he presents himself to the world, from his physical appearance to his character and temperament.

In other words, if the sun sign influences the soul and the true Self, the ascendant and the first house influence the body and the apparent personality. It is the image we wear to present ourselves to the world.

They tell us about the vitality and physical constitution of the native, as well as the diseases that may have a genetic origin. They describe his mood, disposition, and primary impulses; how is his bearing, the way he relates to others, and, in general, how he is seen from the outside.

This also includes the attractiveness or magnetism of the native, the possible beauty or ugliness of him.

The ascendant and first house indicate the way in which the native will try to materialize the ideals and purposes indicated by his sun sign. It is the native’s way of operating in the world, of conducting himself through life and facing events.

It is one of the most important areas of the birth chart, perhaps the most important. For this reason, the sign and the planets that are in it, as well as the harmonic or dissonant aspects that they receive, will have the maximum importance and impact on the destiny and trajectory of the native.

Thus, for example, Venus will favor beauty in this house along with a sweet and affectionate character, which will make the native very dear. Saturn, on the other hand, can make you unpleasant, both physically and in character.

Mars or Aries will give you great vitality and an aggressive or imposing character. Mercury or Gemini a skillful, communicative and intellectual personality, while the Moon or Cancer will give it dreamy, hypersensitive and not very vital.

In reality, the Scorpio man needs you, your benevolent gaze, your balance and especially your love, more than anything else in the material world. He anguishes when his lover takes a step without him, and wants to be consulted for any small decision to be made concerning their relationship.

On the other hand, Mars will foster in this house the temperament known as choleric, Saturn the melancholic, Jupiter the sanguine and the Moon the phlegmatic.

The Ascendant can indicate the atmosphere surrounding the birth (as well as the grandmother), the archetype coloring the beginning of life, it provides information on the state of the mother and the mother-child relationship during this period of the first days.

The Planets in House 1 and their Aspects will tint the personality of the native with their energies, this angular location in a natal chart is very important.

The first house begins at the point called ascending, which rises over the horizon at the moment of birth. It is found in parallel and affinity with the sign of Aries, Mars and the fire element.

The Scorpio man is a great perfectionist. He takes care of his image, shaves closely, tucks his stomach in … The eyes of others, and especially their approval, are very important to him. He seeks the recognition of his peers and, for this, is ready to make many sacrifices.

The Scorpio man is hardworking, ambitious, and meticulous. These qualities and his sense of perfection can make him an excellent surgeon. He will never let go and knows how to bounce back from failure even if it sometimes goes through darker phases.

The Scorpio man is, in fact, rather pessimistic by nature, he tends to denigrate anything that is not exactly perfect. But the native is much more emotional and fragile than he seems.

Above all, he seeks to be loved and valued and for this he tends to hide his feelings: the Scorpio man does not like to be pierced up to date.

The Scorpio man is ambitious, hardworking and courageous. He is also very generous and loyal to those close to him. He respects and admires his elders. His composure is a real roller-coaster ride: he can dramatize over things that don’t matter, but be strong and efficient in crisis situations.

He does not always have great control over his emotions and can sometimes be skittish, sulky and resentful. But if the native sees his mistakes, he will seek by all means to improve himself, especially if his bad character saddens those he loves.

The Scorpio man hates to lose control or reveal his faults. He shows himself strong and upright to be loved and respected. This sometimes too rigid face can cause fear. But the Scorpio man is like a wounded little animal, he protects himself above all else and seeks recognition and affection.

Contrary to what the Scorpio man let’s shine through, women have a very important place in his life. He sees them both as foils and as supporters to give him back the joy of living and lightness. If you’re dating a Scorpio man, sometimes you might think you’re his new accessory, or a pretty vase.

In reality, the Scorpio man needs you, your benevolent gaze, your balance and especially your love, more than anything else in the material world. He anguishes when his lover takes a step without him, and wants to be consulted for any small decision to be made concerning their relationship.

This possessiveness can make him slightly annoying, even tyrannical. But the Scorpio man is also very generous and is not afraid to invest in a real relationship.

He should get along wonderfully with Cancer women who melt him down, Scorpios and Aries, ambitious like him, Pisces and Aquarius women, physically compatible, and Sagittarians for their optimism that compensates for the moods of l ‘Scorpio man.

The understanding will undoubtedly be more delicate with the Taurus women, perhaps too routine for the Scorpio man, the Virgos who do not leave him enough space, the Gemini and Libra too free-spirited, the Capricorn, sometimes distant, and finally the Leo women, with a personality far too opposite to that of Scorpio.

The 1st House is symbolically related to the astrological aspect of the Conjunction as well as to the planet Mars.

The transits on House 1 directly activate your individuality, your self-esteem, your egocentricity, your dynamism, and consequently your moods.