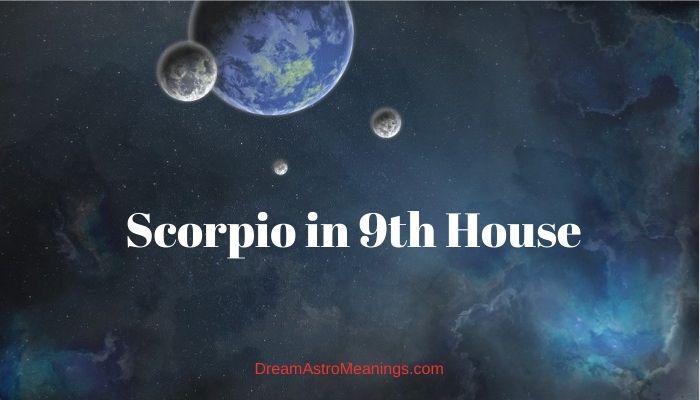 Scorpio with very deep convictions. This sign / cusp combination takes your beliefs and convictions very seriously. Great transformative experiences occur in the areas indicated by Scorpio’s location on the chart.

In the Ninth House, life orientation crises occur as a result of travel, higher education, spiritual beliefs, and a person’s general moral conduct.

This process revolves around the need to refine and redefine the personality through the themes and concerns of the Ninth House. Great benefits can come to the person who is continually involved with these challenges, as the results of these philosophical battles can improve the quality of life.

There is something fatal about them. The most impressive are the eyes and the look under the most often long eyelashes and accentuated eyebrows.

They often have sunken eyes, an expressive face, a gypsy look is their real look. Those who are blonde by nature have something cold Nordic in them, or are a type of female girl, but that is very rare. They do not have accentuated curves, and they will do gymnastics rather than implant silicones.

They stand behind their appearance no matter what they wear, no matter how they put on make-up. Dark colors, silver, burgundy, a combination of black and navy blue, black and red, lace details are their trademark.

With them, you know what you’re up to, or you think you know. When they are the sweetest and sweetest, they do not reveal their thoughts, and in fits of rage, if they throw things away, and often do so even though they hold on to self-control, you are not sure that they have shown everything they feel. Power, first over themselves and then over others, is their motto.

They are bigger and better commanders than Aries and Leo, because they know the human psyche better, their motivation is not to emphasize themselves but to control the situation for the common good, regardless of whether it is a job or a family. They have a dignified attitude and are willing to sacrifice for others if they are highly motivated.

Many will think that this is the most important thing for them and that they are exclusively focused on earnings and good social status. That is a fallacy. A Scorpio woman must be in good financial condition, otherwise she is unhappy.

She truly thinks that she deserves all the best, but she is not insatiable, she doesn’t buy a lot of things, she doesn’t buy chaotically, but she does it with taste and measure. She builds her career very studiously and will not work if it is not the job that gives her the most pleasure, rather than doing something that is below her level.

They know exactly what they want and mostly they get it. These are the women who are remembered, who leave a deep mark in everyone’s life. And if they are gentle blondes or passionate blacks, they are always dominant – they fool their partners so much that they can’t do without them.

If someone thinks to deceive them, revenge follows, because the Scorpio woman does not forgive. He may suffer, but he will never show it, he remembers his former loves for a long time, but he struggles to clear up with the past.

The partner of a Scorpio woman is always weaker than her, and when he is of better financial status, he is also better known. And she has a way of letting him know. Yes, he can’t do without her.

Great as a housewife, as a wife and as a mother. Sacrificed until she took the children on the road. She is fair to her husband even if she stops loving him. A great housewife, but that is not her priority. It has an element of water, of fixed quality, phlegmatic, ruled by the planets Mars and Pluto.

The key word is “I want” and very often it is passion that drives it. It rules the eighth house of the Zodiac which signifies sex, birth, death, reincarnation, the occult, mystery, inheritance, other people’s money. Scorpios are not as simple as Gemini or Sagittarius, so their fate is far more complex.

His negative traits are excessive jealousy with distrust, possessiveness, intolerance, an awkward poisonous character as much as the scorpion itself is poisonous, fatalism, mystery, suspicion, vengefulness, aggression and a tendency to change moods.

He is a very loyal friend who does not like to reveal secrets, does not like formalities, and likes discussions, controversy, risk and research.

This is a sign of renewal, during his reign it is the Day of the Dead, in which life, death and resurrection alternate.

Known as introverted and profound, Scorpios hide their feelings very far from the eyes of the world.

Magnetic attractions that have no limits in love surrender passionately with great intensity and ask the same of their partners.

Pluto, who is their ruler, gives them tremendous energy and passion, so they are considered the most passionate sign of the Zodiac, because s*x for Scorpio is of primary meaning in which pleasure similar to birth and death alternates.

He loves passionately, but his love is unstable and he easily turns from fierce jealousy into tenderness, where he does not forgive cheating, he can take the stars off the sky from his partner and in return he seeks fidelity and trust. He is attracted to strong reliable people and passionate people.

If you want to seduce Scorpio let him know that you like him but he is the one who has to take the initiative. Both in love and in sex, self-destruction and obsession with unattainable people can dominate them.

Their life is a struggle, constant turmoil, constantly in action to consume a large amount of energy.

Beware of Scorpios because they never forget or forgive the injustice done. In business they are committed passionate, very serious, eager for power and success, they have great concentration, they always have their goal in front of them, which is an aphrodisiac, and with them the goal justifies the means.

Scorpio loves spicy foods, especially garlic, while their favorite foods are those that are stuffed so they can explore. They can often be vegetarians, vegans and macrobiotics and one of the reasons they put their endurance and discipline to the test in this way, but basically believe in a healthy diet. They are not prone to weight gain.

Scorpios are attracted to classic cars, and most often those that they restore themselves, preferably with tinted windows due to a dose of mystery.

The ideal home of a Scorpio is an old mysterious house that exudes mystery and which he can constantly renovate.

A person who appeared in the world, when 9 at home in Scorpio, in maturity becomes very religious and deeply delves into the study of philosophy. She is an ardent companion, when the matter concerns issues of faith, ethics and worldview.

They start to keep in curiosity everything that happens in the world. He can actively participate not only in religious and philosophical discourses, but also freely discuss politics. It is always calculated by upset. For this, the entire tool is used. The reason for the inconsistency lies in the fact that it is difficult for such a person to overcome failure.

Because of this, they may require actions from themselves that simply cannot be performed. For example, there are certain lofty ideals to which the character or the outsider tends.

It can turn into the illusion of a thirst for wealth and fame, although it is not really ready for such bonuses and even it will become painful if it gets them.

He has quite slowly developed an understanding of what he wants to do and what makes him happy. In view of the strong pressure of the ideal, such people can absolutely not destroy themselves.

As a result, they have neurosis, and then depression.

This is a dangerous and destructive attitude towards yourself, which interferes with realizing a rich potential and being happy. Lasts up to prolonged periods of suicidal inclinations.

Or she starts to destroy everything around herself. The only way to avoid negative consequences for the psyche is to train and develop the ideal “I”.

However, for this you have to do a little work. The most important thing is to identify all the inconsistencies and resolve internal personal conflicts.

The person who came into the world when Scorpio was in the 9th house becomes very religious in adulthood and deepens the study of philosophy. He is an ardent debater when it comes to matters of faith, ethics, and worldview. He tries to keep in touch with everything that happens in the world.

He can actively participate not only in religious and philosophical discussions, but can also freely discuss politics. He always counts on the success of the part of him. For this he uses all means. The reason for the inflexibility lies in the fact that it is difficult for this person to survive failure.

People who are born with Scorpio in the 9th house tend to be intelligent, uncompromising, determined, and strong.

They want absolute power over people, which is why they often resort to psychological manipulation. Above all, they do not like indecision, weakness, clumsiness, and excessive charlatanism. If you wish, you can request your Natal Chart and know your destination at an unbeatable price.

If they meet a person and notice these qualities in them, they immediately stop the conversation and break off contact. In view of the strong pressure of the ideal, these people cannot adapt themselves at all.

As a result, they can develop neurosis or depression.

The most important thing is to identify all discrepancies and resolve intrapersonal conflicts. Often, adjusting an individual’s attitude in some way requires the help of an experienced mentor.

When it comes to travel, these people are drawn to far away exotic countries. They are interested in solving mysteries and experiencing a special experience, which is only possible when they are fully immersed in someone else’s culture.

Such a person often perceives what is happening around him through the prism of mysticism, of the occult.

However, this only contributes to their development. He is very lucky, he knows how to follow the rules and he is noble.

9 Home in Scorpio is a human character People, born, when 9 Home in Scorpio, strive to be smart, uncompromising, ambitious and strong. They want to have absolute power over people, for which they often come to psycho-logical manipulation.

Most of all they do not like indecision, weakness, stupidity and excessive talkativeness. If they meet a person and mark this quality in him, then at once they stop the conversation and break the contact.