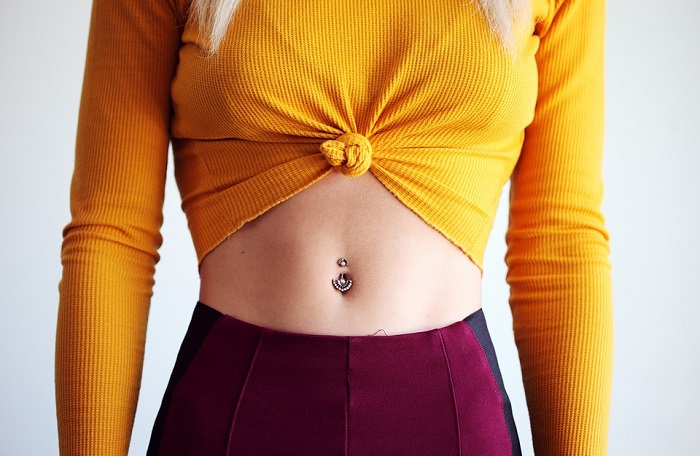 Already in ancient Egypt, decorating one’s body with piercings and tattoos was a widespread practice.

The peoples of Africa, the Maya, Maori, Polynesians, Aztecs, Arabs and Indians also decorated their bodies in this way.

These decorations were intended to distinguish the roles that each member assumes within the tribe; they regulated the relationships between the various individuals both in everyday life and during the ceremonies, making immediately evident, at the glance, a whole series of information on the individual, in relation to the group.

In fact, the organization of these societies is very precise and is based on the subdivision of individuals by social roles.

For example, for the Eskimos the labret was a male prerogative, in a population of North America the labret had a symbolic importance and the size of the object that was inserted in the forum varied according to social status.

Throughout the world we have tried to prove, through the endurance of the pain caused by piercings, tattoos and real sacrifices, belonging to a certain social class, to a group.

Thus it was attempted to overcome initiations and tests, sometimes even trying to reach a state of ecstasy: it was believed that in these circumstances visions would appear.

So the decorations have a mainly ceremonial purpose, the permanent modifications generally mark the important moments in the life of an individual.

Initiation into adulthood is a fundamental step common to all tribal societies. It marks the transition from a period of relative unconsciousness (childhood) linked to the original instincts, to the acquisition of a control of emotions with the recognition of the civil condition.

Through a violent and painful passage, a death and a contemporary rebirth are symbolized, a moment that will remain imprinted on the body for life.

An example was the Sioux who to become warriors had to pass a really hard test: pierce the skin with hooks and thus hang from a tree with ropes until the skin was torn.

Closer to us, instead, are the Punks who demonstrated their superiority through piercings, tattoos, clothes and hair. All this is always done for belonging to a group, always through an initiation rite.

Today piercing has become a mass phenomenon, it has infected the world of entertainment, music and especially young people.

What is the meaning of the piercing? Do not be afraid to confess it … at the top of your desires there has been or is currently a piercing.

The piercing is also liked because there is not just one type, but there are really many, not only to satisfy the obviously different tastes of people, but also to stand out from the others, through that particular detail that emanates light from the smile, from the nose, lips and many other parts of the body. But what is the meaning of the piercing? Well it depends on the type of piercing.

The tongue, for example, that is to say the tongue piercing, is a touch of charm, transgression and an ornament that makes every smile truly unique and dazzling.

The labret, on the other hand, is a piercing that is placed on the lip, also in this case, the ornament helps to increase the intriguing charm of the wearer, but you have to pay close attention to the swelling in the graft site and it is advisable to prevent any infections that can arise.

Ear piercing is perhaps the most common, especially among young and old who drill several holes in the cartilage of the ear, to create that particular cascading luminosity effect that undeniably attracts the attention of the beholder.

Again, the recommendations for all other types of piercings apply. It is certainly nice to be able to show off jewels that become one with the body, but we must not overlook the danger of infections that are always potentially very dangerous.

A particular type of piercing is that of the nipples, a passion that unites everyone, regardless of gender.

The habit of wearing nipple piercings was very widespread in the Roman world, in fact, the members of the guards wore the nipple piercing as a symbol of ostentation of courage and virility, for women, however, the use of the nipple piercing it had some success especially in the nineteenth century, because it was thought that, in this way, the female breast was particularly attractive.

If you want to try this type of nipple graft, you need to pay special attention to small wounds, to avoid the spread of bacteria.

After a pregnancy, it is good to avoid this type of piercing, especially in the presence of fissures.

Do you find it impossible to disseminate the piercings in various parts of the body, to create a truly unique effect and give a unique meaning to the piercing?

Think again, for this there is the so-called surface, that is to say that particular type of graft that fits on the flat areas of the skin. In this way it will be possible to distribute different points of brightness on different parts of the body.

In this case, the piercer will have to pay particular attention to avoid grafting on areas of irritated skin, to avoid dangerous side effects and avoid causing a decidedly very unpleasant bacterial proliferation and also dangerous for potentially very negative health effects. ,

What about the timeless navel piercing, an authentic piece from the Nineties in the field of piercing that represented an ancestral meaning of ancient rites related to fertility and love.

The athletes, in particular, love to show off even multiple piercings on the flat stomach, in order to create magnificent effects with colored stones, very bright rhinestones or jewels of various shapes.

In short, the whole world is piercing, we could say, paraphrasing a famous saying, precisely because everyone in the sunlight or secretly, at least once in their life, wanted to have a piercing.

After this brief rundown of piercings, all we have to do is decide which one is best for us. Do you have a beautiful smile and want to highlight it? The tongue is certainly the most suitable in this case.

On the other hand, those who love tradition and consider piercing as an expression of elegance will choose the most suitable ear jewelry for their personality, bright points of light from an unusual perspective.

The nose piercing, a legacy of ancient tribes, transmits a subliminal message linked to freedom, joy, contact with nature and one’s fellow men.

An invitation, therefore, to break down barriers and see what lies beyond appearances, to live in full harmony.

Nowadays a body piercing is very common for many people, we find piercings in children, women and men. Various cultural, religious or personal reasons can play a role for a piercing.

Most of the time the body piercings are done for aesthetic or fashion reasons, but what we don’t know is that it can actually have a spiritually or energetically harmful effect on us if it is done in a correspondingly unfavorable place.

However, if the piercing is performed on suitable acupressure points, we can feel a positive spiritual effect.

At SSRF, we conducted spiritual research to see what happens on a spiritual level when someone pierces their nose or ears compared to other parts of the body.

Our spiritual research found that piercing on the earlobe and also the left side of the nose is spiritually beneficial. Acupressure pressure on points of the nose and ears has a healing effect and the distressing energy in the body is reduced.

Areas of the body that are unsuitable for piercing include the eyebrows, mouth, tongue, and other areas of the face or body. The following sensitive picture describes the effect of a piercing on such areas.

The following picture, which is based on spiritually acquired knowledge, was drawn by Ms. Yoya Vallee, a seeker of the SSRF with a trained sixth sense.

Yoya has the ability to see into the spiritual world and draws subtle pictures as part of her spiritual practice (Sādhanā) and as a service to Absolute Truth (Satsēvā), the drawings are then verified by H.H. Dr. Athavale checked.

A piercing on the eyebrow increases the person’s ego as it increases body awareness – identification with the body.

Ego rings are also activated and sent out by the person. Waves of tempting (attractive) and deceptive (illusion-inducing) energy are sent out from the person so that others feel good looking at them.

Distressing energy is sucked into the area that has been pierced and also forms a subtle shell around the person with the piercing.

The same effect occurs when we have a piercing on the tongue, in the mouth or on other parts of the body.

After doing this investigation, there are the following main points to look out for: A piercing in certain areas, such as the left nostril or the ear can be spiritually very good for your health and protect against negative energies (ghosts, devils, demons, etc.).

Piercings around the eyebrows, mouth or tongue do not bring any spiritual benefit and only cause distress to the person.

It is important for us to understand the effects that different everyday behaviors have on us.

If we make sure that we do things that enable us to take up sattvic (sāttvike) vibrations, it brings us spiritually advantages and benefits and we receive spiritual, energetic protection from distressing energies in the environment.

No matter what your goal is, maybe you are looking for a change that gives a new impetus to your life or you want to highlight particularly beautiful aspects of your body or simply because you like the thrill of the new, the unusual and the piercing.

It seems to you the most suitable means to experiment with all possible ways to bring out your secret self.