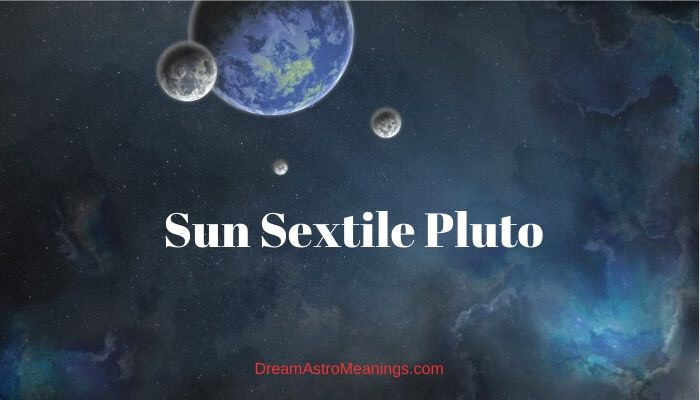 Astrology is an ancient practice which can be very helpful in determining human traits and possible life events through the positions of the planets in the person’s natal chart.

The relationships formed by the planets during their movement are called aspects.

In a natal chart, these relationships are permanently fixed in time and create personality traits, but they also influence the events in the person’s life.

The main aspects are the Conjunction, Trine, Square, Sextile, and Opposition. These aspects are the creators of all important events and traits, especially if they are exact or with tight orbs.

The sextile is considered a harmonious aspect. This aspect is created when two planets are within the distance of 60 degrees, with a tolerance orbs of up to 8 degrees. Some astrologers tend to keep these orbs tighter, and they allow up to 2/5 degrees for this aspect.

This aspect creates a harmonious bond between two planets and enables them to cocreate rather than work against each other.

Some astrologers consider the sextile aspect similar to the trine which is considered the best aspect of all, and some refer to it as the “lesser Trine”.

The signs naturally forming sextiles aren’t in the same element, like the signs that form trines, but their elements are complementary, such as fire and air, and earth and water.

The signs which form sextiles are Aries and Gemini, Gemini and Leo, Leo and Libra, Libra and Sagittarius, Sagittarius and Aquarius, Aquarius and Aries, Taurus and Cancer, Cancer and Virgo, Virgo and Scorpio, Scorpio and Capricorn, Capricorn and Pisces, Pisces and Taurus.

The energy between planets which form a sextile is cooperative and that means that the planets help each other to perform their best. This aspect helps the person get the best of the both planet and their interchanged effects.

This aspect can create hidden talents which are ruled by the planets which form a sextile.

Sextile is a harmonious aspect but it has a tendency of making the person lazy and unambitious because everything seems to fall into their laps. They have a lot of opportunities to develop their talents but they are often lacking the initiative in seizing these opportunities because they know that another one will soon come.

Because of these tendencies they waste a lot of time and often end up not using their true potential.

Often these transits indicate people entering the person’s life which will help them succeed in some of their endeavors or develop their talents.

The Sun is the basic source of energy for life on planet Earth. It is the central start in our Solar system with a mass around 330,000 times larger than the mass of Earth, and a diameter 109 times bigger than the diameter of Earth.

The Sun’s composition is mostly hydrogen and helium. It is believed that it formed around 4.6 billion years ago.

Many cultures on our planet worshiped the Sun as their main deity because of its important role for life on Earth.

The Sun in astrology symbolizes our consciousness, rules our life force and willpower. It also describes the purpose of our life, our identity and ego, as well as our vitality. This planet symbolizes our reason and rationality.

A prominent Sun gives the person traits like determination, energy, creativity, and knowing your direction in life. A strong Sun makes the person egotistical and self-centered.

The sign where the Sun is placed can describe the person’s purpose in life and the way they influence their outer world. The Sun also describes our most prominent personality traits.

It also rules the person’s health, individuality, their conscience, power, self-esteem, self-reliance, vanity, etc. It rules success and successful people, as well as wealth and wealthy people. It rules men.

The Sun indicates what can be a motivation for us and where is our focus in life. It can reveal the things we consider important in life. It symbolizes decisiveness, determination, courage, energy, devotion, motivation and initiative.

Negative traits can be prone to bragging, egotism, self-centeredness, and selfishness.

The sign where the Sun is describes personality traits and the person’s character. The influence of the Sun over the person’s life can be determined as a combination of house placement, sign, and the aspects the Sun is making with other planets.

Pluto is a dwarf planet, and that means that it is not actually a planet, because it lacks some of the traits of a real planet. Pluto was discovered in 1930 and was considered the last discovered planet. It is important in western astrology.

It symbolizes regeneration, transformation, death, and rebirth. During important progressions and transits, this planet’s influence can transform the person’s life, especially the lives of people with a prominent Pluto in their natal charts.

The energy of Pluto is aggressive, violent, and destructive. It can symbolize destructive and violent events in the person’s life, and sometimes this refers to the person’s behavior. Pluto also symbolizes waste and putrefaction.

Pluto rules the soul, and gives the person deep intuitive insights. Pluto is a truth seeker and makes the person under its influence in constant pursuit of the truth. This person often seems to intuitively know what is going on in some situation. They have a gift for revealing secrets and hidden truth.

The house in the natal chart where Pluto is placed shows the area of life where the person is likely to confront some intense powerful forces which can both create and destroy things.

The person itself can cause these changes, but they can also be a result of outside influences which the person cannot control.

The changes Pluto is causing can often be difficult for people to go through and are the cause of great stress. The result is a transformation which the person can benefit from.

This planet is related to issues like dominance, control, and manipulation. The person itself can be manipulative, domineering or prone to control others, but this can also refer to the person being manipulated, controlled or dominated by others.

Sometimes the role of Pluto is to teach the person to get rid of these bad traits, or to learn how to release themselves from these toxic influence other people have over them. Pluto often points out the areas where the person needs to remove something bad and destructive.

Pluto rules power which can be expressed in different situations. Because Pluto belongs to generational planets, placed in a certain sign describes the area of society which the generations of people born with Pluto in the same sign will collectively try to change and transform in some way.

Transits of Pluto to the placements in the natal chart, or transits of other planets to natal Pluto often trigger some events that will bring major transformations in the person’s life.

These changes often come unannounced. These influences are especially strong in regards to people with powerful Pluto influence in their natal chart.

The Sun in Sextile to Pluto is a powerful aspect to have, even though it is not as strong as having the Sun Conjunct Pluto, or Sun Square Pluto. These aspects make the person magnetically attractive without much effort.

People seem hypnotized by this person and are naturally drawn to them.

People with Sun Sextile Pluto easily influence others, and can use this ability to make people do what they want and manipulate them. This is not often the case with the Sextile aspect, but with some bad aspects between these planets it can often happen.

This aspect gives the person strong willpower and ambition. They are confident and brave and go after their goals.

The Sextile aspect can make the path easier because it removes the obstacles and potential conflicts from the person’s path, which is not the case when these two planets make bad aspects. The Sun and Pluto in aspect are responsible for some great achievements.

People with Sun Sextile Pluto have a strong drive to succeed and the necessary determination and persistence to finally achieve what they desire.

They are strong individuals and usually don’t like team work. They are often driven by some goal that will make them stand out from the rest of people. They often have an urge to do something out of the ordinary and something that will make people remember them.

This aspect has a transforming nature because Pluto the planet of transformation influences the Sun which represents our personality. During important progressions and transits, the person might expect some life and personality changing events.

These people are not superficial and they don’t usually waste time on things that aren’t important for their life or are meaningless.  Their personality is strong and they leave a powerful impression on others.

In some cases they can have a tendency to be bossy, obsessive, or express tyrannical behavior.

In some cases, this person has a strong desire to become famous and different than others and they usually succeed in this intention. This can have a negative effect, and the person might begin considering themselves super-special and becoming self-consumed.

Many of these people enjoy when others admire them, and that is food for their ego. They can also become egotistical, and develop a superior complex. It is important to always keep in touch with reality and don’t allow such feelings to grow.

Their energy is contagious. These people can light the fire in their surroundings. They cannot be still for a long time, and always need to have some action.

Many people with this aspect possess a need to control and manipulate the behavior and actions of their loved ones, under the excuse of good intentions.

Their need to impose their opinion to others often creates conflicts and angry outbursts, but with Sextile, the situation usually doesn’t get as bad as with some other aspects.

Sun Sextile Pluto can give the person inclinations to secretive matters and occult sciences, and some can even possess psychic powers and abilities.

They possess strong intuition and are able to penetrate through other people’s intentions and read their thoughts easily. These people usually despise lies and can easily spot a liar.

These people can often be an example to others. The Sextile aspect helps calm down the powerful nature of these two planets, and allows the person to control their powerful temperament and energy.

Your powerful energy and your pioneering endeavors and success will encourage others to take action and begin pursuing their dreams and goals. You inspire courage and confidence and help people overcome their fears and confront their life challenges with determination.

The transits between the Sun and Pluto are responsible for transformative processes.

The Sextile transit often increases the desire of the person to succeed and accomplish something important. This transit makes the person feel determination and focus on their priorities.

During this transit, the person can actually use their obsessions over something or someone to make some great achievements.

This transit often marks a period when a person gets rid of some unwanted or unneeded things and people. The person might end a toxic relationship or end a bad habit which is jeopardizing their health, etc.

This transit often coincides with the person’s heightened attractiveness and desire for physical intimacy. People seem to be drawn to them during this transit.