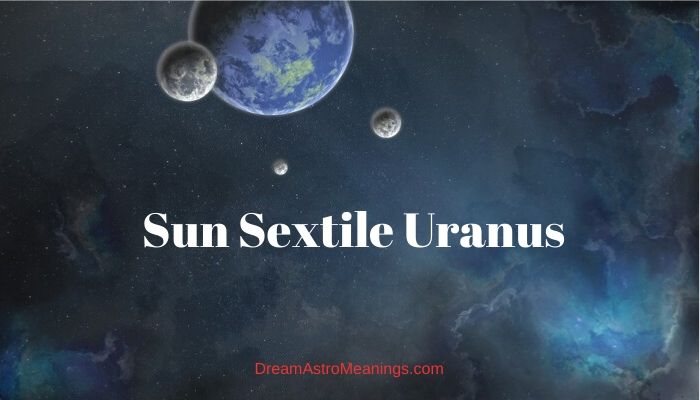 Astrology is used for centuries as a tool to determine someone’s personality traits as well as their probable destiny. Astrology uses planets and their placements in signs and houses, and the aspects they make with other planets to discover these information.

Aspects are relationships the planets make while moving, and represent certain angles they form.

These aspects can have beneficial and malefic influence, and their strength depends on the exactness of the aspect.

There are major and minor aspects. Major aspects are the most responsible for our destiny and shaping our character.

Minor aspects can also be significant when the angle between the planets, forming them, is exact.

Sextiles are a major aspect and are considered harmonious. The Sextile has a similar energy and influence to the Trine. This aspect is formed when there’s an angle of 60° between two planets.

The tolerance in this aspect is 5° which means the planets can be at a distance from 55° to 65°.

The aspect enables the planets to express the best in their nature as well as to cooperate to provide the person with their best gifts. Sextiles enable the planetary energy to flow freely, unlike the unharmonious aspects which block planetary energy and create obstacles.

Sextiles form naturally between signs of complementary elements, such as water and earth and fire and air. Sextiles create a cooperative and balanced energy so that the person can get the best of their traits.

Sextiles form the person’s skills and talents, and they help develop them as well, during significant transits and progressions which trigger the natal Sextile aspect.

Because Sextile brings fortunate opportunities into the person’s life and the person usually get s things done with ease, Sextiles can also have negative effects on the person because they diminish their desire to go after their goal and seize the opportunities that appear before them.

They know that opportunities come to them easily and don’t have a problem with missing chances, at the same time postponing their actions for another moment in time. Sextiles often make people lazy and waste their time and talents.

People with a lot of Sextile aspects in their natal chart often end up not using their full potential.

On the other hand, people with challenging aspects need to fight for every opportunity to come to them, and they usually become more successful in life.

Transiting and progressed Sextile aspects usually introduce fortunate opportunities into the person’s life, which can enable them to develop their abilities and progress.

Sometimes these aspects introduce some people that could help them achieve their desires or develop and use their talents.

Life on our planet wouldn’t be possible without the Sun. Many astronomers share a belief that the Sun was formed about 4.6 billion years ago.

The Sun is the most significant star in the Solar System and is much larger than Earth. It is mostly composed of hydrogen and helium. Because of its importance, the Sun was worshiped as deity since the beginning of humanity.

In astrology, the Sun symbolizes our willpower, consciousness, identity and ego, our life purpose, and our vitality. It also represents our rationality and reasoning abilities.

When the person is strongly influenced by the Sun, they possess traits such as determination, creativity, and energy. This person knows where they are headed in life. With challenging aspects, the person might be self-centered, egotistical, overly confident, or have a superiority complex.

The Sun’s placement in a certain sign reveals the person’s main traits and the possible direction the person might choose in life. It describes their character and what motivates them. It takes the Sun 30 days to go through one sign.

The Sun rules Leo and its energy is the most potent when it is in this sign. The Sun is also strong in the sign of Aries where it is exalted.

It can reveal whether the person is vain or self-absorbed. It also rules wealth and success, as well as wealthy and successful people. The Sun is also the ruler of men.

The placement of the Sun in the person’s natal chart, reveal how determined, courageous, decisive, devoted, motivated they are. The Sun’s negative traits are self-centeredness, egotism, selfishness and bragging.

When analyzing the Sun’s placement in the natal chart and its influence over a person it is important to consider the sign, house, and the aspects the Sun is making.

Uranus has a similar composition to Neptune and is composed mostly of ice. It is the coldest planet in the Solar system, and its temperatures reach -224°C. On the exterior, Uranus is made of layers of clouds, and its interior is mostly ice and rocks. It has 27 moons and has rings.

Its name is the name of the Greek good of the sky, grandfather of Zeus and father of the god Cronus. He was one of the first gods in ancient Greece.

Astrologically, it symbolizes sudden events that change our lives completely. Uranus rules genius people, discoveries and inventors. It is also ruler of creative people and creativity. This planet also rules all means of transportation, especially air transport and airplanes.

In bad aspects to personal planets, Uranus can be responsible for breakups and endings of relationships.

Uranus also rules destructiveness and catastrophes, electricity, healing powers, telepathy, psychics, nervous system, etc. It also has a transformational effect on the society in general and inspires revolutionary changes. It is also responsible for global discoveries and

Uranus influence on a person can be determined by analyzing the sign, house and aspects it is making. Transits and progressions involving Uranus might trigger major events ruled by Uranus or with Uranus nature.

The changes this planet brings could improve the person’s life or they might cause misfortune or disappointment.

The Sun in Sextile with Uranus in the natal chart gives the person adventurous and explorative character. This person will most likely be eccentric and a bit egotistical. They might think highly of themselves, especially in regards to their intellectual capacities.

Of course, these people might be very smart, and often genius, but in some cases, the attitude stems from their big ego.

They want to be noticed in public for being different from the rest, and they don’t shy away from publically expressing their eccentricity. This person often has a rebellious nature and a need to confront authority.

They love changes and enjoy making them. They might be in constant pursuit of excitement and new experiences.

These people have a strong personality and value their freedom immensely. These people don’t like others telling them what to do and they prefer individual to team work. Their ideal profession would be something where they could be their own boss, or a job which gives them necessary space and freedom to organize their time.

People with Sun/Uranus aspects are often fighters for human rights and against injustice of all kind. They often risk their lives and sacrifice themselves for the good of society not asking anything in return.

In some cases, these people are a part of movements that support changes in society, or they work for humanitarian institutions where they put in their time and energy to help others.

These people can be famous inventors with discoveries that somehow improve the world.

They love people and their company is sought after. People love being around them listening to their stories.

They often lead adventurous lives and can be interested in all kinds of extreme activities. They know that they are special and different than others and sometimes they feel lonely because of that fact.

In many cases, this aspect is present in the natal charts of people in the IT sector. They can also be interested in matters such as astrology. They are confident about their abilities. In some cases, these people might possess psychic and telepathic abilities.

This aspect makes people very smart and quick-witted. They are creative and often choose a career where they can express this side of their nature.

These people are focused on the future, and have no problem accepting changes and innovations. They quickly change their mind if they discover that another way of thinking is more practical. They actively seek to improve their life.

These people might be considered rebellious but they have a way of controlling their unpredictable nature.

They are very curious and have various interests. They also possess strong intuition that helps them make the right choices.

They are honest and respect that trait in others. They can be prone to opposing general opinion but they have a way of controlling their reactions and avoiding conflicts.

Transiting Sun Sextile Uranus or transiting Uranus Sextile Sun can indicate some unpredictable events and meetings that could easily change the person’s life.

This transit often marks a time when the person needs to experience something exciting and new and there will be many opportunities for such experiences.

During these transits the person might feel the need to experience more freedom and independence.

Maybe the time has come for the person to release themselves from the influence of some person or circumstances.

This could be the time where the person feels creative and a desire to express their creativity in some way.

The person might feel the need for adventure and pursue such activities; in some cases, during this time the person might realize that they are adventurous and they might completely change their interests.

For some, this period might indicate encounters with people that might broaden their horizons and awake their desire for freedom and adventure.

They often become more sociable and many people become a member of some social groups or humanitarian organizations because they suddenly begin feeling the urge to do something that will benefit their society.