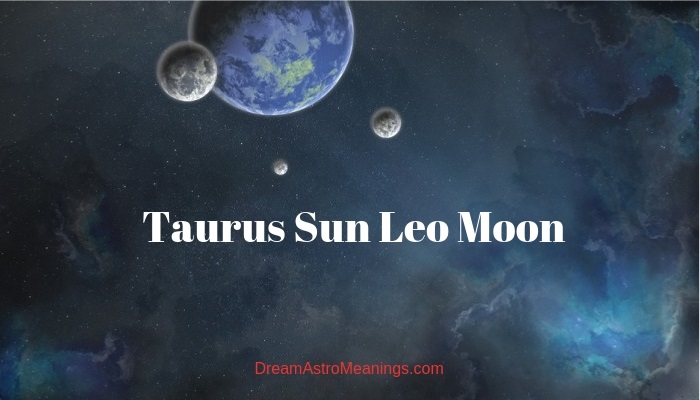 The Sun represents the side of our personality we decide to share with the rest of the world, both with the people we know well and strangers.

The Moon on the other side represents our inner being and our subconscious side of personality, which we choose not to share with everyone, but only with the people who are very close to us.

People with Sun in Taurus and Moon in Leo usually have a dominant personality and want to be the center of attention in all occasions. They often believe that they are better than others and have a strong ego and high self-esteem.

These traits are actually good for them because they enable them to get what they desire; on the other hand, these traits often cause other people to dislike them.

People with Taurus Sun and Leo Moon can be very self-absorbed and focused solely on themselves. It is difficult for them to listen to other people and they often desire the conversation to focus only on them and their lives.

They can be very inconsiderate and mind only their business and aim to satisfy their desires not worrying too much if they will hurt someone with their actions.

These people love comfort and luxury, and would do anything to provide it. Most of them desire to live a luxury life filled with pleasures and they usually find a way to live such a life. They can be prone to spending money way beyond their means and jeopardizing their financial situation.

Fortunately, Taurus is a very reliable sign and they usually manage to control their urges to overspend, although in some cases they could experience financial ruin because of their expensive desires.

People with this Sun/Moon combination are usually attractive and very passionate.

They are also direct about their desires and prone to pursue the people they like. They are usually very ambitious and desire success. They typically choose a profession which can provide substantial income and possibility for advancement.

These people can in some cases be prone to use manipulation and even pressure to have their way and succeed in their intentions.

Not all Taurus Sun Leo Moon people are like that, but in general, these people have strong personalities and even stronger desires for success, power, wealth, and luxury, and all that makes them very determined to accomplish all these goals.

These people are a combination of fire and earth energy, and both of these signs are fixed signs, which make these people hesitant to make any changes.

They are not at all flexible and can be very stubborn. They don’t give up on their ideas easily and rarely change their minds.

These traits make these people very difficult to collaborate with because they don’t accept anyone’s opinions but theirs. They also don’t like authorities and being told what to do. They function best when they have their own business than being someone’s employee.

Even when they work for someone, some of these people are prone to exhibit their behavior of a spoilt brat which they use to manipulate people and get what they want. It is incredible how other people are likely to tolerate these people’s eccentricities and extravagant behavior which is always on the verge of being extremely inconsiderate.

They can recognize quality and desire to have quality things. With Leo influence, that desire can indicate extravagant spending to have expensive and branded items with which they will show off with in public.

In some cases, these traits are not very obvious and some other characteristics of the signs of Taurus and Leo prevail, such as generosity, kindness, helpfulness, and desire to care for and nurture others.

Although these people usually tend to be focused first and foremost on themselves in some cases they tend to be more down to earth and aware of the people around them.

The bad traits of Sun in Taurus and Moon in Leo: arrogant, self-centered, have a superiority complex, loud, stubborn, inflexible, avoids changes, don’t like compromises, difficult to get along with, inconsiderate, egotistical, etc.

People with Taurus Sun and Leo Moon are an earth/fire combination. This Sun/Moon makes them confident and often full of themselves. They are often arrogant and self-centered.

These people have a difficulty making agreements with their partners. They desire everything to be the way they want, and that often creates conflicts with people who like to have their say about things that involve them.

They have strong personalities and desire a partner with a strong character as well.

The only problem is that people who are confident and independent appreciate their free will very much and don’t like to be followers and do what they are told. In the best case scenario, they desire to make a compromise with their partners.

That is one of the main reasons these people end up with people who have weaker characters than theirs, and these people are able to manipulate their partners’ will the way they want.

One way or the other, these people manage to impose their will and their desires.

They are passionate and desire a passionate partner. Their partner should be someone they will be attracted to very much. They are not shy and openly demonstrate their desires and needs.

These people make good spouses for partners who are tolerant and don’t like to have the last saying in a relationship.

For people who are comfortable with not having the lead and being organized by their partner, this person is a good match. They also need to be immune to their self-centeredness and superior attitude.

People who have similar traits to these people usually don’t like these people, and the dislike is mutual because both sides consider each other rivals and none of them desires a competitor.

In marriage and long-term relationship, the situation is similar.

They need to have things done their way in all segments of mutual living. They consider their opinion on every matter the best in any way, and usually don’t even take into consideration what their partner has to say.

If these people have some other influences which could neutralize the effect of these traits, the situation could be different and these people could behave in a slightly different manner.

For people with Sun in Taurus and Moon in Leo, the best match would be someone who can tolerate their exaggerated personality and need to be in the center of attention.

Possibly the best partner for them could be a Pisces, Gemini, or Libra.

If there’s a will for compromise on their side, as well as genuine intention to change their character a bit, they could get along well with signs of all elements.

People with Sun in Taurus and Moon in Leo are usually self-centered and egotistic.

These people can be full of themselves, arrogant, and have a superiority complex. They often believe that they are somehow better than others and that they deserve everything they desire.

These people have a high opinion about their personal value and qualities and desire to be admired by everyone, especially by their partners.

These people are often prone to imposing their opinion on other people and don’t like to make any compromises.

They want things to be the way they desire and others just need to comply with their will. They are difficult to be in a relationship with because of their character.

People who are as strong-willed and confident as they are, usually don’t want anything to do with them. Their attitude and self-centeredness could easily irritate people, but they usually don’t care about what others think of them.

Because of their need for things to always be as they desire, these people often end up with people who are tolerant, dependable, weak, and desire to be guided.

They often mess in their partner’s affairs and tell them what to do. They do that with their children as well. They often get overly involved in their lives and control every move they make. They need to be admired by their partners.

Their dominant nature cannot be easily tamed. They are passionate and their partners should be passionate as well. They are open and direct about their needs.

They love the comfort and luxury lifestyle and do everything to provide it. They are very ambitious and manage to reach high in the social status scale.