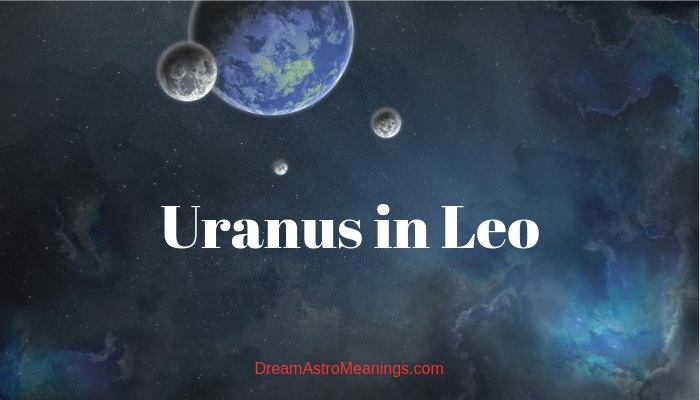 The planet Uranus is the coldest in our Solar system with a temperature of -224 degrees. Its interior is mostly composed of rocks and ice and exterior consists of layers of clouds.

Astrologically, Uranus rules unexpected events with transformational effects. These events usually happen when people resist an inevitable change. Events triggered by Uranus usually bring life-altering experiences into a person’s life and their warnings should never be neglected and underestimated. If a person doesn’t react in time, the consequences of these events could be irreparable.

Uranus is the planet of genius discoveries and inventions. People who are strongly influenced by Uranus usually have the ability to create innovations and find new ways of doing things which will be beneficial for a lot of people. This is a planet of original thinking and originality.

Uranus rules humanitarianism and humanitarians. People under its influence enjoy helping people and fighting for some world scale humanitarian cause.

Uranus is also the planet of sports and sportsmen. It rules sports activities, sports events, clubs, stadiums, etc. People under the influence of Uranus are often into extreme sports and love such activities.

Uranus influenced people are often unpredictable, rebellious and inconsistent in their goals and actions. They are prone to changing their focus to another more interesting and newer thing. They are not very considerate to other people’s feelings.

This planet is responsible for many unpredicted and devastating events and sudden changes people experience in their life. Accidents are one such event which could bring a complete transformation in a person’s life.

It is important to be aware that Uranus’s actions are focused on teaching a person a lesson and transforming their behavior and beliefs into a direction which will best serve their purpose. The more resistance people put into resisting these necessary and unavoidable changes, the more severe the events they will experience.

In some cases, Uranus influence is the cause of someone’s sudden death.

Uranus activity always comes as a way to get rid of the past and make space for the new to come. Revolutions and similar events usually come when there are some necessary changes in one society, and people cannot tolerate some oppression or an existing status quo.

Uranus is the planet of anarchists, revolutionaries, anarchists, and rebellious people in general. It is the ruler of protests, boycotts, demonstrations, and other organized activities against some authority.

This planet also rules authorities, bossy people, and even tyrants. People ruled by Uranus usually have issues with authorities and most of them cannot stand them. The main reason is their love for freedom in any form which they don’t allow to be jeopardized.

They love to have their freedom to think and do whatever they think is right and not something a person in authority tells them to. They could be considered disobedient and prone to oppose the rules.

Although their actions could be considered destructive, they usually have a greater cause and that is the benefit of a lot of people. They are revolutionaries, but at the same time are reformists. They are often considered eccentric and unpredictable.

The planet Uranus is the ruler of unexpected changes, and many of them are not pleasant, but most of these events are somehow invoked by the person itself, by ignoring some signs and things that need to be done. Uranus rules bankruptcies and money loss.

Uranus rules separation. Because it is the ruler of freedom and freedom loving people, Uranus is often the cause for divorces and break-ups of relationships. The main reason for these endings could be one or both partners’ infidelity.

This is the planet ruler of all engineers. It rules electricity and electronics and all related to these areas. It is the ruler of movies, television, radios, telephones, etc. It is the ruler of postmen and post offices. Radiology and radiologists are also in the domain of this planet. Astrology and astrologers are also under its rulership, as well as astronomy and astronomers.

The planet Uranus gives powerful personal magnetism to the ones it influences. These people often have psychic gifts and abilities, and often use them to help people but also for material gains. Uranus is the planet of healing and healers. Uranus is also the ruler of telepathy and telepathic experiences.

It rules the nerves and the nervous system and all nervous disorders. It is the ruler of psychoanalysis and psychotherapy.

That means that the sign it is in, doesn’t have much influence on an individual and that when determining its influence we should also consider Uranus placement in the natal houses as well as aspects with other planets.

Badly aspected Uranus is the culprit for many unexpectedly unpleasant events and situations people encounter in their lives. These events happen when Uranus is activated in a person’s chart through progressions and transits. Uranus in good aspects to other planets often invokes a fortunate unexpected set of circumstances which change a person’s life for the better.

When talking about Uranus’s influence on generations of people and society in general, it is often revealed as some massive changes of global beliefs, behavior, discoveries and inventions with worldwide importance, changes in perception, style, etc.

People usually don’t sense its influence through signs, but they apply it through the global changes it is causing and which part they are.

In this text, we talk about the general characteristics of people born during Uranus’s transit through the sign of Leo.

Men with Uranus in Leo usually have a magnetic influence on people, but tend to be self-centered and prone to bragging.

These people have an enormous ego and want to be in the center of attention at all times. They also are very competitive and have the tendency to compete with everyone they come across.

This attitude bothers people from their surroundings and often causes talks and gossip behind their back, and in some cases, it causes open conflicts with people who don’t agree with them.

These men have the need to convince people to accept their opinion on things and they could be very persuasive to some point. They often choose professions where they could be in the spotlight.

Usually they have a gift of finding out unusual and unique ways of earning money, and are financially well off.

Women with Uranus in Leo can be self-absorbed and prone to talking about themselves and bragging about their accomplishments. They usually have a lot to brag about, but that often annoys people around them.

These women (like men with this placement) are usually very generous and love helping people who have less fortune than they do, but they often do it in a pompous and arrogant way which diminishes the sincerity of their act.

These women can be very good at performing at stage and acting.

They are usually very talented and creative and make good actresses and musicians. They need to work on their overbearing pride and become more humble because people might begin avoiding them.

Some of the good traits of Uranus in Leo are:

Some of the bad traits of Uranus in Leo are:

– pompous, overly proud, prone to bragging, intolerant, strenuous, self-centered, egotistic, want to be in the center of attention, unhealthy competitiveness, ruthless, full of themselves, etc.

Uranus in the sign of Leo is in its place of detriment, which means that it cannot display its full power and energy.

People with Uranus in Leo are eccentric and love to brag about their qualities and possessions. They often consider superior to others and don’t hesitate to openly express how they feel.

These people are prone to taking major risks without thinking things through, and regardless of the consequences they might suffer.

In the sign of Leo, Uranus gives people born during this transit the energy to pursue their goals until they accomplish them. These generations are usually very creative and their creativity is most evident in the field of new technologies, as well as in the creative fields, such as arts, movies, music, etc.

Leo gives these people a huge ego, and they often have a feeling that they know everything best and don’t need to listen to anyone’s opinions but their own. They often give themselves goals that seem impossible to reach, but they manage to achieve them through the power of their will.

These people are very ambitious and never give up on their desires and goals.

These people have leadership skills and are often leaders in their communities. They always need to be first in every situation and have a desire to be in the center of attention. These people are born actors and entertainers.

They are often full of themselves and need to learn the art of being more humble and not be so self-centered.

Their desire to be first often gives them a dose of ruthlessness and intolerance to their characters. They are very competitive and love competing with others. They always try to prove to others that they are the nest. People can find these traits annoying.

One thing is certain these people are very talented and creative. They also have a talent for inventing new ways of entertainment and making money. They often earn money being in the spotlight. They are very sociable and usually surrounded by friends and acquaintances.

They are enthusiasts able to spread their enthusiasm and their excitement onto other people.

They are generous and selflessly help others that don’t have as much as they do. Sometimes they can become overly self-absorbed and bothering people with their problems and needs.

When they have a problem they have difficulties to solve, these people don’t hesitate to smother other people with their depressing stories and complaining.

Their mood influences people. When they are happy, everyone around them is happy, and when they are down, not many people could be immune to their negative energy.

These people need to learn to respect others more and pay attention to their feelings. Their self-centeredness could chase quality people away from their life.

Uranus is a transpersonal planet, just like Neptune and Pluto. These planets influence generations of people born during their transits through one sign.

Uranus takes seven years to finish transiting one sign; that is why its influence is felt like a collective impact of the sign Uranus goes through. All people born during this reign share these traits.

If we want to discover the impact Uranus have on an individual, besides the sign, we need to consult its placement in a natal house as well as the aspects Uranus is making with other planets in that chart.

Besides these, we should also consider the transits and progressions related to Uranus at a specific moment because they are the ones which point out to certain events and changes in a person’s life.

People who are born with Uranus in Leo are often magnetically attractive and have a great talent for entertaining and attracting the masses, but are also self-absorbed and very egotistic at the same time.

They need to learn to control these negative traits so they can make the most of their talents and relationships with other people.