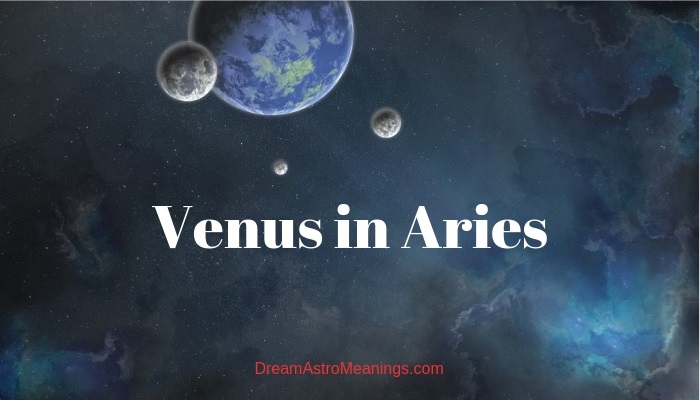 Venus is the planet which is the second most visible night object in the sky, the Moon being the first.

This planet is the second closest to the Sun, following Mercury as the closest. It orbits the Sun in about 225 days.

This bright planet has played a prominent role in many cultures and mythologies, and has that role even today. Its name came from the Roman goddess of love, beauty, female principle, and fertility, Venus.

The planet Venus is strongest when it is in the signs of Taurus and Libra. Venus rules these signs.

During its transit through different signs, this planet takes on the traits of the signs it goes through.

In Aries, Venus is in detriment, which means that the planet is in the sign opposite to the sign it rules, in this case Libra.

A planet in detriment is not a good placement for a planet and means that the planet doesn’t feel good in that sign and it doesn’t have strength at all.

In this article, we give the traits of people born with a Venus in Aries, and see how the sign of Aries influences this planet.

Men born with Venus in Aries are straightforward and open about their interests and desire to be with some woman. They don’t hesitate to show her that they like her and usually don’t want to waste their time on long courtships.

If a woman doesn’t respond quickly to their attention and courting, they usually back off and begin looking for another girl.

These men are confident and usually not very emotional. They most likely have a hard time expressing their love and devotion to a woman, even if they are deeply in love with her. One of the main reasons for that is that fact that they usually feel awkward in that role.

That is something their woman needs to get used to and accept as normal because it is not likely for this man to change this trait.

Venus in Aries men are passionate and full of energy.

They are in constant pursuit of some action, and they don’t have a problem approaching the women they like. They can be very direct and often blunt in their approach, which can intimidate and scare away women who are not used to such approach, or who need some more time and getting to know the person before getting to the next step.

These men can be very impulsive when it comes to expressing their desires and they often make huge mistakes because of that. They often end up in relationships or even marriages with women who are not the right ones for them, simply because of their inability to control their reactions and wrong and thoughtless decisions.

They are also very honest and straightforward. They don’t want to do anything behind a person’s back and tend to speak the truth regardless of the consequences they could possibly bear. They despise people who play games.

Venus in Aries woman usually doesn’t like to play flirting games. She makes sure the person she is interested in realizes that fact as quickly as possible. She usually does that by attracting this person’s attention and demonstrating her interest, often using not very subtle ways.

These women, like men with this placement, don’t want to waste their time on people who are indecisive and don’t know what they want. They are passionate and desire the same response from the person they like.

Timid and insecure people turn them off and they tend to walk away once they realize that.

These women usually have a domineering nature which can pose an issue to their relationships. They usually prefer confident men with strong personalities, but such men don’t tolerate their women telling them what to do and be leaders in their relationship.

Their tendency to dominate and be the leader in a relationship is a trait these women should resolve because it could cause damage to their love life.

Men with this placement have this trait also, but for them it is a normal expression of their masculinity. For women, this trait is not very acceptable.

Women with Venus in Aries are often not very feminine and usually display some masculine traits. That is what the sign of Aries usually does to Venus when this planet is in this sign. For women, these traits can be a problem in their love life.

One of the obvious demonstrations of this is their inability or difficulty to express their feelings.

These women often have an issue with saying “I love you” even when they feel it strongly. Some of them are not very emotional and that is something their partners need to accept.

On the other side, they are very direct and honest in expressing their opinion, and don’t have a problem telling it to anyone, especially the person they are involved romantically with.

Some of the bad traits of Venus in Aries are: impatience, impulsiveness, direct, blunt, not very emotional, difficulties in expressing love and emotions, dominant nature, desire to be the leader in every relationship, loud, need to be in the center of attention, etc.

When the planet Venus is in Aries, it is in its detriment, meaning that it currently is in the sign opposite to the sign it rules, the sign of Libra. That means that Venus doesn’t feel good in the sign of Aries and its strength is weakened.

When Venus is in the sign of Aries, it receives its traits and blends the traits of this sign with its traits.

People who have Venus in Aries are very direct and open in their communication and approach to people, especially to people they are interested in physically or emotionally.

These people don’t like flirting games and openly show their interest to someone. They are often loud and try to avert men’s attention with their attitude. This approach works on some people, but others can find it overbearing and a cause to avoid them.

These people are often impatient and want everything now. That attitude can be irritating for people who like to take their time and get to know someone before dating them or committing. They get along best with people who have similar traits.

People with Venus in Aries enjoy movement and action.

They have a lot of energy and they often put it into a realization of some creative projects. They are not particularly talented for arts, but they have their own style and many people find it appealing. They love people who are energetic as well and inspired to take action.

These people love people who are direct being direct and open themselves. They refuse to waste their time on relationships which don’t lead anywhere.

Although it is ok not to waste time and take action, they can sometimes be very impatient and pressure people to decide which could have a bad effect and consequences.

These people don’t like people who are indecisive and don’t know what they want.

They need to be inspired to invest in the relationship and if someone doesn’t represent a challenge they lose their motivation. They need to be treated with honesty and directness. They are also very honest and don’t have a problem telling their truth.

That approach causes them to respect you and respond in the same way.

These people can’t stand playing games, and usually leave once they discover what is going on.

They are very passionate and enjoy physical intimacy. They are often sports types and in shape, and are attracted to people who have similar qualities. Their relationships and marriages are usually dynamic and full of activities.

They don’t like to be tied to the house and love outdoor activities. They often have a dominant nature and want to be the leader in their relationship.

That need is not a problem when a man has Venus in Aries, but a woman with this placement could have issues getting along with men who don’t like their woman be the boss, especially because these women love to have a strong and confident man by their side.

These people have a very competitive nature and often compete with everyone around.

Venus in Aries people are happy, relaxed and easy-going. They love spontaneous activities and appreciate people who have that trait. They can act rash and without taking much thought.

That approach could lead them to haste decisions which cost them a lot afterwards.

One such scenario is getting married without putting in much thought, and soon realizing that it was a huge mistake. They are very impulsive, especially when it comes to the matters of the heart, which is a trait they need to control if they don’t want to bear the consequences of their actions.

People born with Venus in Aries are known to fall in and out of love quickly. They lack constancy. They love being independent and that can be an issue when they are in a relationship, especially if they are with a partner who is possessive. They don’t like stagnation, routine, and passive partners.

These people are good friends and are always inspiring others to do some action. They are optimists and enjoy life. They are usually not very emotional, and have a problem when they need to express their feelings.

Venus in Aries people are confident and openly speak their mind about things. They can be overly direct and hurt people’s feelings. They should learn to pay attention to their behavior and their words and avoid hurting others.

Venus in Aries doesn’t have its full power. In fact, it is weak because it is in its detriment, in the sign opposite of the sign it rules and where it has the full power, the sign of Libra. Due to that fact, many of the beautiful traits of this planet are limited or they don’t play an important part in a person’s life.

People with this placement are often not very emotional, or at least, they have issues with expressing their feelings and emotions, in which case, they appear unemotional, and people perceive them like that.

They are bursting with energy and always ready for action. These people are very passionate and desire their partner to be passionate as well.

These people, both men and women tend to have domineering characters, and prefer being the leader in their relationships.

Men don’t have a problem with that, but women tend to have issues with the men they are dating because they often end up in a power struggle with them, or they get abandoned by these men.

They are usually very impulsive and tend to have uncontrollable reactions and actions, which often cause problems in their life. These people often bear the consequences of their irrational decisions and they cannot easily go back. In many cases, these people enter relationships or marriages without thinking through their decision, and end up feeling sorry for what they did.

People with Venus in Aries are very open and easy-going, and they don’t have a problem approaching people they like. They are very direct in expressing their interest and they don’t like to play courting games.

One of the reasons is their desire not to waste their time with indecisive people or people who don’t know what they want.