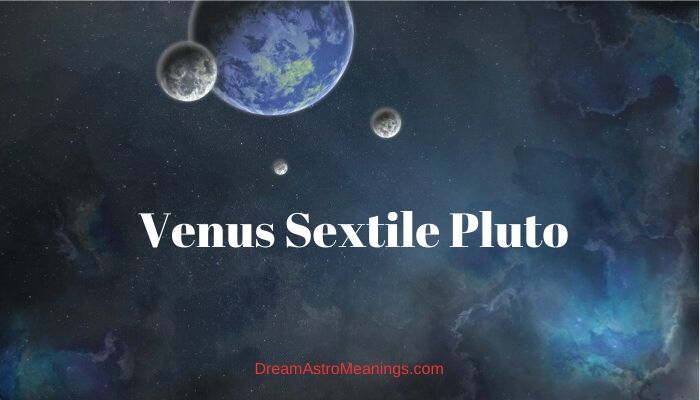 Astrology is a useful tool to determine someone’s character and their basic traits. It can also determine potential course of the person’s destiny and events they might experience.

Astrology does that though interpreting the planets and their relationships in the natal chart.

The relationships between planets are called aspects, and aspects are very important to figure out the main individual traits. They are formed by the planets during their movement through the Zodiac.

Also, aspects are formed between the planets in the natal chart, which represents a frozen image of the sky in the moment of the person’s birth.

Especially aspects with exact orbs have the most important influence on the person’s life.

The Sextile is a good aspect with similar traits to the Trine. It is formed when the planets are 60° apart. This aspect is at times called “the lesser Trine”.

This aspect creates a good bond between the planets which form this aspect, and enables these planets to demonstrate their best traits.

This aspect makes a cooperative relationship between planets where one planet helps the other to show its potential, which in the end helps the person who has this aspect to get the most of both planets and experience favorable circumstances in their life.

Regularly, Sextile aspects are formed between the signs which have complementary nature and element, like fire and air or water and earth. Sextiles are creators of the person’s talents and special skills.

The skills and talents are present in the areas ruled by the house and sign where the planets forming the Sextile are placed in the natal chart.

Sextiles create opportunities for the person to develop their talents, or discover them, to begin with.

This aspect has a beneficial nature, but too much good can sometimes be harmful. In the case of Sextile, this aspect gives the person endless opportunities for progress and success, and that could make the person lazy and takes away their ambition.

They begin expecting everything to fall into their laps and missing wonderful opportunities because they know new ones will soon appear, but they are only wasting their time.

It often happens that people with predominately challenging aspects between their planets, like Squares and Oppositions, manage to become more successful than the Sextile type person, because the challenges and obstacles they encounter only make them stronger and more determined to succeed.

The Sextile person usually doesn’t encounter any obstacles and that is not a motivation to take action and go after the goal. These people often don’t use completely their natural potential.

Transiting Sextile aspects create new opportunities and often introduce people in the person’s life that could help them discover their talents or develop them.

Sometimes these transits will help them begin using their talents and making the most of them.

Following the Moon, Venus is the brightest star on the night sky; it is also known as the “evening star” or the “morning star”. It is very bright and easily visible by naked eye.

Venus is the second closest to Sun, and only Mercury is closer. Venus never distances from the Sun and it takes it around 225 days to orbit the Sun.

Venus rules the signs of Libra and Taurus and is strongest when is in these signs.

Pluto was considered a planet since 2006, when it changed it status into a dwarf planet because scientists concluded that it lacks some of the traits of a real planet.

In astrology, Pluto is still considered a planet with an important influence on humans and society in general. It rules transformation processes and regeneration, death and rebirth.

Events ruled by this planet are often triggered by Pluto involved transits. These events are of transformative nature and the person is usually completely changed after going through such an event.

Pluto’s influence is strongest on people who are ruled by this planet or have it prominently placed in their natal chart. Its energy is brutal, violent, aggressive, and destructive.

People under the influence of Pluto can also possess these traits. They can also experience events with such a nature.

The planet Pluto is the ruler of our soul and the desires of our soul. It gives people deep intuitive insights and connection to their inner being.

These people are able to receive answers from within. They have strong instincts and instinctively know what the right thing to do in some situation is. They sense when others are telling lies and it is difficult to hide a secret from them.

They have a natural inclination towards seeking the truth and unveiling secrets. Even when they don’t try at all the truth somehow seems to reveal to them.

Pluto rules hidden matters and secrets, as well as all secret knowledge and mysteries.

People influenced by this planet are often fascinated with such matters, and often practice some secret knowledge. They easily discover the intentions of other people and almost seem to be able to read their thoughts. They have a magnetic appearance and influence on others.

The place where Pluto is in our natal chart, shows the areas where the person could confront powerful issues which could change their life forever. These powers could either destroy or create something in their life.

The person can use these powers themselves, or they could come from some outside source over which the person doesn’t have any control.

The planet Pluto rules major life changes, like Uranus, but the nature of Pluto causes the changes to transform the person from within as well as their outside circumstances.

Pluto creates space for new things to come by removing the old. These transformative events caused by Pluto influence might be disturbing for many people.

The person ruled or influenced by Pluto could possess these traits and be prone to domineering and manipulative behavior, destructive actions, anger outbursts, and controlling others often forcefully.

In other cases, this influence might reveal itself with the person being prone to being treated in a controlling and manipulative manner, being in a surrounding filled with conflicts and anger, or experiencing similar circumstances in their outer world.

Pluto usually shows the area of our life where we should remove something that is preventing our progress and filling us with negativity.

Because it is a generational planet, Pluto influences major changes in society with transformative nature.

Venus Sextile Pluto in the natal chart influences people by making them passionate and interested in all matters related to love and relationships.

They are usually very attractive and have a lot of opportunities to become romantically involved. They also have strong physical desires and their attachments are deep.

Many of them desire to physically merge with their partner until they become one person. They can also be obsessive and jealous in relationships, prone to controlling their partner’s behavior and movement.

Many of these individuals become fixated on their partner and begin suffocating them with their affection.

Their attachments are strong, and they have a hard time letting go of someone or something they love and care about.

Love is very important for these people and they enjoy giving it as well as receiving it.

They often experience relationships where there is deep and passionate bond between them and their partners. They often seek partnerships that will last a lifetime and are usually not prone to casual dating, even though they don’t lack the opportunities.

These people have strong and intense feelings and they tend to consume their partners by them.

They are not shy at all, and they can be overwhelming to partners who are not as passionate as they are. They can be very imaginative in their intimate encounters and they are prone experimenting in love.

Until they find the right partner, they might be prone to changing partners for the sake of gaining experience, but when they finally meet their soulmate, they become incredibly loyal and attached without the need to look any further.

People with Venus Sextile Pluto aspect are loyal to their partners, but also their friends and family members. They give themselves completely in all their relationships and might become disappointed if they don’t receive an adequate respond from the other side.

In many cases, these people tend to be very popular because they possess natural attractiveness which people subconsciously feel. They often appear mysterious and hard to understand, especially if there is a strong Scorpio or Pluto influence in their natal chart.

Sometimes these people might find mysterious people and partners very attractive and be attracted to this type of people. They usually keep their private life a secret and only chosen people get to know details from their bedroom, and private and family matters in general.

They become very attached to their partners, and if the relationship needs to end for some reason that could have a devastating effect on these people, and sometimes scar them for life.

Many of these people have a difficulty recuperating and getting their life back together after a breakup. They sometimes need a lot of time to start trysting people again and give another person a chance to start a new relationship.

These people might love luxury and they are often in position to provide it for themselves, either by earing the money themselves, inheriting it, or getting it through their partnerships.

They are often born with money or they might marry someone who is wealthy. With this aspect the person often ends up inheriting a lot of money and real-estate which provides them financially for life. They usually get richer with time.

The Sextile transit between Venus and Pluto usually deepens feelings and often indicates an opportunity to begin a passionate relationship.

This transit might indicate meeting someone that will sweep you of your feet and make you madly in love.

It might indicate the beginning of a passionate love affair that will turn into a life lasting partnership you have always longed for. This transit is often related to meeting someone special.

Single people might become obsessed with someone they like very much, desiring to start a relationship with them.

This is a time where your existing relationship might deepen. In some cases, this transit indicates secret affair.