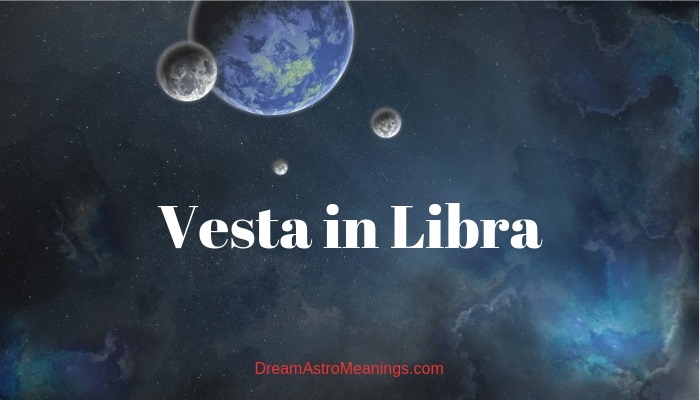 There are two giant craters on its surface and is presumed that they were a result of strong collisions which happened billions of years ago. Meteorites formed from the debris of these collisions were found on Earth as well.

The asteroid Vesta got its name from the name of the Roman goddess of home, fertility, and family. The goddess Vesta was also the protector of the Roman people.

She was rarely depicted in human form and was usually symbolized by the sacred fire which was burning in her temple in the Roman forum. She was one of the most important goddesses of the Roman pantheon and very admired by the ancient Romans.

The women allowed to be in the temple were the priestess of Vesta, the Vestal virgins, or Vestals. These priestesses were chosen by the Pontifex Maximus and later by the Emperor, from young girls aged six to ten years.

There were six of them and these girls needed to give their consent to remaining virgins in the next 30 years after which period they could be released from the priesthood service. They were honored to be in Vesta’s service, but it required a lot of sacrifice from them.

The main role of the Vestals was to take care of the sacred fire of Vesta and make sure it never seized to burn. It was believed that the burning of the fire ensured the protection of the Roman citizens and that its extinguishing would cause some disaster to the people of Rome.

Those Vestals who failed to perform their obligations in the temple were severely punished, usually bitten.

Vesta was a well-respected deity. She was a virgin but also was the goddess of fertility to whom women who couldn’t have children prayed to. The Vestal virgins performed rituals for fertility and good agricultural harvest.

In astrology, the asteroid Vesta symbolizes the way we confront the issues regarding our work, devotion to some cause or people, sacrifices we make, our integrity, as well as issues arising from refraining from personal relationships and intimacy.

It rules the different conditions which could potentially arise in our psyche as a result of abstaining from relationships or intimacy. It also indicates the potential issues arising from our fear of intimacy and close relationships.

The asteroid Vesta in a certain sign or house in our natal chart points the areas of our life where we should put in our focus. It also indicates the people and things we should get rid of. Vesta shows how we choose to deal with our physical needs and our passion and urges.

Vesta in our natal chart also points out the areas of our devotion. It also shows in which areas of life we possibly feel restricted or inhibited, or we lack initiative or action.

This asteroid indicates where in our life we should make some sacrifices for some cause or for someone. It also indicates the need to sacrifice something for a greater good.

Vesta symbolizes our devotion to someone or something, like a person, a cause, a belief, or some project, etc. It also indicates the areas of life where we have issues or we ignore the issues we have.

It might reveal the issues which we deliberately hide from others. These areas are usually very important for us, but we, unfortunately, keep experiencing problems in relation to these areas.

This asteroid gives us persistence and endurance to keep our focus on our goals as well as to deal with the issues we encounter while accomplishing these goals.

Men with Vesta in Libra are usually good diplomats and sociable.

They don’t like individual work and prefer to do their work in a company of other colleagues.

They can be competitive and comparing their work and other qualities to others which could cause unnecessary tension.

These men strive towards balance and harmony, but in some cases, their behavior causes these issues.

They are often torn apart between their desires and the desire to make others happy.

Women with Vesta in Libra are kind and sociable.

They desire equality in all their relationships and reciprocity between giving and taking in these relationships.

That desire often collides with their desire to please others and put everyone’s needs first.

These women have good diplomatic skills and are able to adapt to any company.

The good traits of Vesta in Libra are adaptability, compromise, sociable, desire equality and reciprocity in relationships, diplomatic, kind, desire balance and harmony in their relationships, etc.

The good traits of Vesta in Libra are need to please others, putting other people’s needs first, competitive, comparing themselves to others, creating unhealthy relationships through their competitiveness, need for admiration and acceptance, etc.

People with Vesta in the sign of Libra prefer to work with other people and don’t like individual work.

They want to introduce others in their work and benefit from their help. They need to interact with others and that is very important for their stability.

That inspires them to put in more effort into achieving the best results.

These people often have the need to compare themselves and their work efforts, achievements, etc. to others, which could cause problems in their relations with their coworkers and cause extreme competition in their workspace.

This attitude could lead to unhealthy relations at their work and cause them to compete with their coworkers instead of collaborating with them.

These people need a balance of giving and taking in all their relationships, especially ones of intimate nature.

Their need for equality in their relationships is a major factor of their stability.

nother thing about these people is their need for acceptance and admiration, which makes them ready to give up on their priorities and desires.

They consider it very important to create a balance between theirs and other people’s priorities. That could cause giving away their control to others.

These people are artistic and are very good at managing their way in all kinds of social situations.

They are usually very sociable, mostly good at making compromises and are good diplomats. They should try to find a balance between fulfilling their needs and their desire to please others and make them happy.

People with Vesta in Libra are sociable and diplomatic.

They can also be competitive and prone to comparing themselves to others, especially at work, which can cause issues with their coworkers.

These people love to have balanced relationships but they where they give as much as they receive, but they also desire to please others which makes the first desire difficult to fulfill.