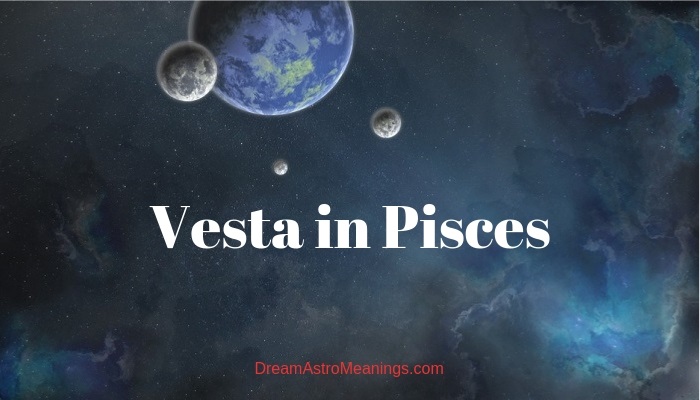 Vesta has two giant-sized craters on its surface and it is believed that they are a result of mass collisions from billions of years ago.

The debris caused by these collisions fell on Earth in the form of meteorites.

Vesta the asteroid, got its name from the Roman goddess Vesta, the goddess of home, family, and fertility. She was also considered the protector of the Romans. Vesta was symbolized by the fire burning endlessly in her temple which was in the Roman forum.

She was considered a very important goddess and was even dedicated a holiday called Vestalia.

Her temple had women priestesses, the Vestal virgins, or Vestals. They were chosen as young girls from the age of six to ten to serve in the temple for a period of at least 30 years during which they’ve agreed not to lose their virginity.

The Vestals were at first chosen by the Pontifex Maximus, the chief priest of Rome, and later, from the time of the emperor Augustus, that role transferred to the emperors of Rome.

The Vestals’ main role was to take care of the sacred fire in the temple of Vesta because it was considered a protecting factor for the citizens of Rome. If the Vestals somehow failed their duties they were severely punished.

The goddess Vesta was a virgin, but also a deity of fertility. She was prayed to by women who couldn’t have children. The Vestals performed rituals for good agricultural harvest and fertility.

The asteroid Vesta astrologically symbolizes the ways we choose to deal with the issues at work, the sacrifices we make, the devotion to something or someone, our integrity, and the issues which we encounter because of refraining from intimacy or personal relationships.

Vesta rules the psychological issues which arise because of abstaining from intimacy and relationships or fearing these two.

Vesta placed in a sign and house of our natal chart indicates the areas where we should focus on. This asteroid also points out the people and things we should get rid of from our lives.

It indicates how we deal with our passion, physical needs and urges. It indicates whether we are suppressing them or exhibiting them openly.

Placed in a sign and house of our natal chart, Vesta indicates the areas where we choose to devote our energy and focus. It also indicates where we feel inhibited or restricted, or the areas we feel we lack initiative and action.

Vesta shows us where in our life we need to make some sacrifices for a cause or for some person. It also shows what we need to sacrifice for a greater good.

Vesta indicates our devotion to someone, or to something; that can be a person, some cause, a project, some belief, etc.

Vesta also indicates the areas in our lives where we experience some issues or we tend to ignore the issues we have. It also reveals the issues we deliberately hide.

It is essential to note that these areas are usually very important to us and for some reasons we seem to fail at them.

Vesta also gives us the endurance to achieve our goals and maintain our focus on our goals; it also helps us overcome the issues we encounter while achieving these goals.

Men with Vesta in Pisces are very kind and want to be of service to anyone.

They often have a problem of focusing and their minds can be scattered which is why they often struggle with performing their tasks in time or in a correct manner.

These men usually have good intentions, but in some cases can be prone to complain about their inabilities and make other people feel guilty or somehow responsible for them.

They can be very open about their physical needs and prone to changing partners and indulging in pleasures with various people.

Women with Vesta in Pisces are good and kind souls, and usually very helpful.

They have a desire to serve other people, but they often have a problem with their ability to concentrate which makes them difficult to perform their tasks appropriately.

These women can be excellent healers. They have a vivid imagination and often a strong intuition. They are usually very spiritual.

In some cases, just like men with this placement, these women could be prone to use their weaknesses as a means to make people guilty or responsible for them.

These women are usually open about their physical needs and often prone to changing partners.

People with Vesta in Pisces are prone to manipulation and instilling guilt and feeling of responsibility in other people, lack of focus and concentration, unfaithful, prone to living in an imaginary reality, etc.

People with Vesta in the sign of Pisces have a desire to serve others, especially in their work environment. They need to serve people who are in need. These people lack focus which makes it hard for them to achieve their duties as well as to accomplish their goals.

In some cases, people with Vesta in Pisces could be prone to play the role of martyr trying to instill guilt in others and make them feel responsible for their sufferings.

These people might try to heal others with physical encounters. They might also be prone to interacting intimately with a variety of people without devoting themselves to any of them.

They might be good healers and are very spiritual. They might have a prominent fantasy and can be prone to living in imaginary reality and not stand firm on the ground.

People with Vesta in Pisces are not very organized.

They are often confused and lack concentration which prevents them from performing their regular duties, as well as helping others.

These people can be very spiritual and possess strong intuition.

They are prone to changing partners.

Some of these people can use their weaknesses as a way to manipulate others and make them feel guilty and responsible for them.