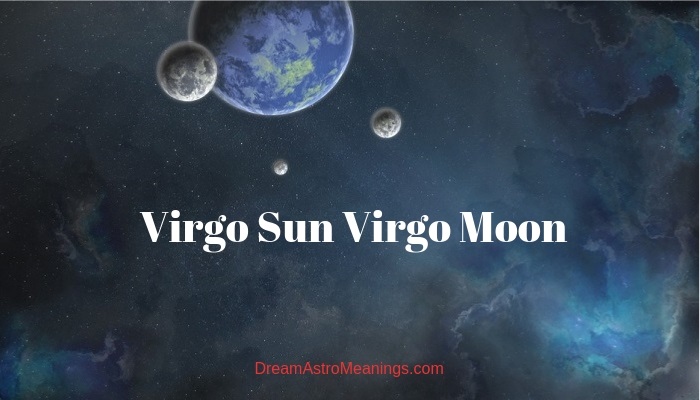 The sun sign in our natal chart describes our conscious and rational actions, while the moon sign describes our inner being, and our subconscious reactions.

The moon side of our character is not very visible to the outside observer because we tend to keep it for ourselves or share it only with the people who are close to us.

On the other side, the sun side of our character is made of the traits and behavior visible to the people from our surroundings.

People with both their sun and moon in Virgo have doubled earth energy and influence of the sign of Virgo in their natal charts.

These people usually have a difficult character and are not easy to get along with. They can be overly critical and judgmental.

These people often believe they have the right to give advice to other people and tell them the way they should behave. They don’t allow the possibility of being wrong under any circumstance.

They can be very direct and openly criticize people’s behavior or actions not caring much about the possibility of offending them or making them angry.

These people, on the other hand, don’t allow anyone giving them any remarks to their behavior and can instantly get angry if anyone tries to criticize them.

They are often inconsiderate towards other people’s feelings and allow themselves to speak whatever comes to their minds.

They have double standards because they are not tolerant when others try to behave in the same manner as them. In such situations, these people usually stop talking, begin an argument, or do something similar to express their discontent.

Because of their tendency to behave in such a manner, people might begin avoiding them and talking behind their back.

Their behavior might jeopardize their relationships even with the people they care about. No one can be that tolerant to put up with such treatment.

These people need to realize that their behavior is not acceptable and they need to change it. They should become more tolerant of other people’s differences and accept them without having the need to criticize or comment about them in any other reprimanding context.

Aside from these annoying traits, these people usually have good hearts and sincerely desire to help others. They are very analytical and make fast conclusions which are very accurate.

They are very intelligent and often excellent with any kind of manual work. They often choose manual work to be their profession. They are skillful, precise, and practical.

They are also very organized and desire to keep every area of their lives in complete order. They are very tidy and pay special attention to their personal hygiene.

These people are often loners, or at least prefer being on their own. They have difficulties getting along with people because of their high demands which not many people can tolerate and respect.

They usually have a set of rules and habits they stick to, and don’t allow anyone to change them. They also try to make everyone around them respect these rules, which is often impossible.

For people living with them, these things can be very annoying and causing them pressure.

People who live with them might be put in front of an unbearable situation where they have to think about all the rules they need to follow in order to make these people happy and prevent them from nagging, criticizing them, or getting angry with them.

Lack of tolerance is these people’s main issue. Because of these traits, these people often choose to live alone, or they end up living alone because people cannot stand living with their rules.

For the sake of longevity of their relationships, not only romantic, but also their family relationships and friendships, these people need to learn to become more relaxed and tolerant.

They need to respect other people and their wishes and try to make a compromise with them.

Otherwise, their behavior could create many conflicts and damage good relationships.

These people have Mercury as their ruling planet for both their sun and moon. Mercury gives these people a gift of good expression and love for reading. Some of them might possess a writing talent.

They could become successful writers and journalists. Their analytical approach makes them excellent problem solvers. They have an eye for details and nothing seems to miss them. They are meticulous and perform their duties with perfection.

These people can be very choosy when it comes to people they spend their time with. They usually choose people with qualities they appreciate and respect.

If these people don’t like something or someone, they don’t hesitate to tell their opinion immediately a thought crosses their minds. They are direct and very honest.

These people don’t tolerate lies and that might be a reason for ending a relationship with someone. They are often very selfish and think about themselves first without minding if they hurt someone with their attitude.

The good traits of Sun in Virgo and Moon in Virgo:

The good traits of Sun in Virgo and Moon in Virgo:

Virgo people are very independent. With moon and sun in the sign of Virgo that trait is emphasized even more.

They usually have their way of doing things and habits they cannot give up, which is why it is difficult for them when another person, a partner or a spouse enters their lives.

They usually have the need to mold that person into their habits and make them behave the way they do.

That can often pose a problem because most people don’t like being told what to do and prefer compromising in such situations.

These people on the other hand are not very adaptable, and usually want things to be done their way, which inevitably in most cases leads to conflicts.

In some cases, these conflicts are the reason for the relationship or marriage to end.

Their demanding nature often chases their partners and spouses away. They are often unaware of the need to change and consider themselves perfect accusing the other person of not being flexible enough.

They are not very emotional and have a practical approach to relationships. These people often don’t know how to express their emotions and need time to relax before beginning to show their feelings to their partners.

Because they are inflexible and strong individualists, they find it hard to decide to commit to someone.

Every relationship requires adjustments and adaptation and they are usually not ready to adapt and compromise.

With many of these people it is: “either my way or the highway”, and that is how their relationships end, in a breakup or divorce.

If they have some other element present in their natal charts they might not be so rigid and be more tolerant, which eases their relationships and ensures their longevity.

Even when they are in love with someone, these people have problems with adapting. It is in their nature.

They are usually not very passionate either (although some of them could be quite promiscuous). Many of them opt for open type relationships and never get married.

They often don’t want children because they are also an obstacle for their desired way of living.

If they have children, they could behave very rigid and strict towards them demanding they perform all their duties and not giving them much space.

The best match for a person with sun and moon in Virgo is another earth sign, or a water sign.

Fire signs are not a good match because they don’t have sufficient patience to deal with their nature.

Air signs could be a good match because they have a natural tolerance and ability to adapt to different people.

They are prone to judging other people’s actions and behavior without being asked their opinion. They are very direct and often offend people with their blunt remarks about them.

On the other hand, they don’t tolerate anyone criticizing them and telling them their opinion about their actions.

These people are completely unaware of the way they behave. They have double standards and allow themselves to comment on things about others without letting others comment them.

They are organized, precise, detailed, and analytical. They sincerely want to help others, but often spoil the impression by adding some unnecessary comment or criticism which makes people sorry for accepting their help.

These people are not easy to live with because they are very demanding, and their partners and spouses know that best. They are usually loners who have their set of rules and habits around the house which they try to make others follow.

That request is not easy for everyone to accept and creates conflicts and arguments with their partners who demand the right to behave as they please, or to at least make a compromise with them.

Unfortunately, these people are usually not into making compromises and that often causes breakups and divorces of their relationships and marriages. They have very rigid attitudes and beliefs and they rarely change them.

On the other side, they will try to convince everyone in their accuracy.

If they want to establish and maintain healthy and lasting relationships these people will need to realize and accept their mistakes and become more tolerant and appreciative of others.