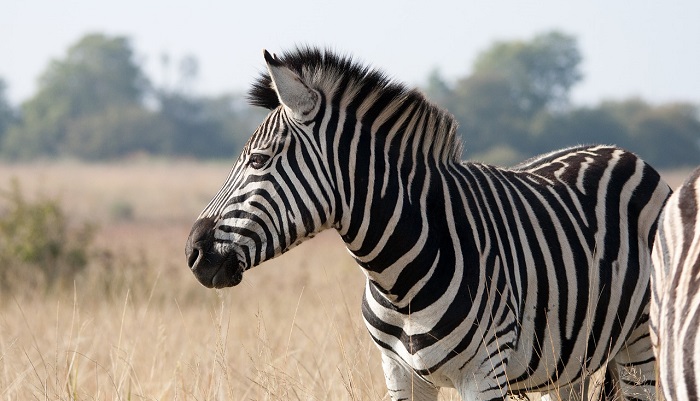 Zebras are species belonging to the horse family. They are native to the African continent. They have a black and white striped pattern over their bodies and each individual has a set of unique stripe patterns. Zebras are very beautiful animals and often hunted for their unusual skin pattern.

These animals are very social and usually live in groups, which can be small harems or large herds. Zebras have never been domesticated although there have been attempts.

Three species of zebras exist: the plains, the mountains and the Grévy’s zebra. The first two resemble horses and the third one looks more like a donkey. These species don’t interbreed between each other.

Zebras live in various habitats, such as savannas, woodlands, grasslands, scrublands, coastal hills and mountains. Mostly due to their excessive hunting, zebras, especially the mountain and the Grévy’s zebra, are considered endangered.

These horse/donkey like animals, evolved in the last 4 million years.

The most common of all three species of zebras is the plains zebra. The plains zebra is around 1.3 meters high and up to 2.6 meters long. An adult zebra can weigh up to 350 kg. The Grévy’s zebra is much larger, and the mountain zebra smaller than the plain zebra.

The stripes that the zebra has are actually white on black background. There are many theories to explain the zebra stripes. The most common theory is that the zebras use them for camouflage purposes.

One theory also suggests that the stripes serve for cooling the zebra while the air flows over the black and white stripes.

Zebras are slower than horses, but are very enduring animals with a great stamina. That ability helps them escape potential predators. Zebras run in a zigzag motion when they are being chased by predators. They also don’t hesitate to attack, bite or kick the predator if they are within a close range.

Mountain zebras usually live in harems of one stallion and several mares (up to six) with their foals. Stallions without mares live alone or with groups of bachelors until they are old enough to win over a breeding stallion and take over its harem. The stallion tries to protect its harem and the foils when they are attacked. 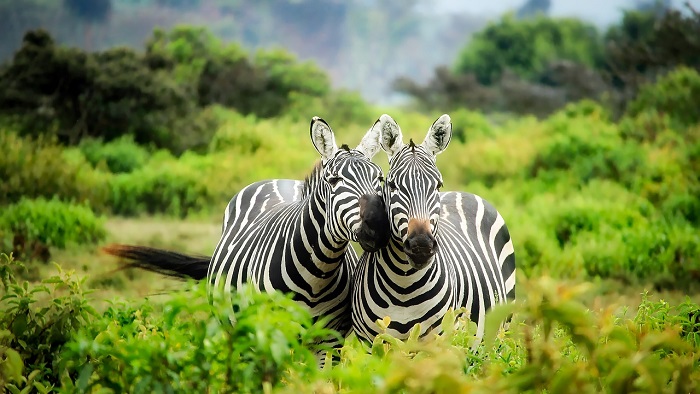 The Grévy’s zebras don’t have such close bonds, and usually don’t stay together more than several months. The adult males live alone and the foils live with their mothers. Bachelor males also live in groups.

Zebras, just like horses, sleep on their feet, but they sleep only when there is someone to warn them of predators. They have developed different means of communication through high-pitched barks and neighing. They also snort when they are under tension. When a zebra sees or senses a predator it begins to bark loudly.

These animals feed mostly on grass, and sometimes they eat herbs, shrubs, leaves and barks. They have a digestive system which supports lower nutritional food quality, than the rest of the plant eating animals.

The female zebras are reproductively mature by the age of three years, while the males can breed after the age of five or six years. In every twelve months the females can give birth to one foal, which they nurse up to a year. The young can stand, walk and suckle their mother quickly after birth.

The young are usually protected by the members of the group, except with the Grévy’s zebra where the group falls apart after several months.

What does the Zebra Symbolize?

The Meanings of Zebra as a Spirit Animal

The Zebra as a spirit animal can have many different meanings. Here are some of them:

Individuality. Every zebra individual has a unique stripe pattern on its body. No two zebras with the same stripe patterns exist in the world. The zebra spirit animal is reminding you of your uniqueness and the need to appreciate and value the fact that there is no one like you in the world. Love yourself for exactly who you are.

You don’t have a duplicate, don’t ever lose that from your sight.

Resistance and fight. The zebras fiercely fight against predator attacks. They kick and they bite their opponents and sometimes they end up being victorious against much stronger and dangerous rivals. The zebra totem animal teaches you to fight for your rights. Always try to defend yourself and resist the attacks from potential enemies.

Don’t be afraid if they appear or they are much stronger than you. Trust that you have the abilities to win over them.

Duality (light and dark). The zebra has a dual color pattern, which is black and white. The zebra spirit animal is reminding us of the different sides of our personality, light and dark, and the need to embrace and accept them as an equally important part of us.

Protector. Zebras usually participate in defending the members of their group from predator attacks. These totem animals teach you of the importance of taking care of and protecting your loved ones.

Alertness. Zebras are very alert animals. They don’t even sleep if there isn’t someone awake to watch for potential predators. This totem animal teaches you of the need to be alert, not only to avoid potential danger, but also to avoid missing good opportunities which come your way.

Community. Most zebras are social animals and spend their days in their herd with other zebras. They help each other survive the harsh and dangerous conditions they live in. The zebra totem animal is teaching you of the necessity and importance of being a part of community and about the beauty of the help and support your community could give you.

It also teaches you of the beauty of giving to the community and helping its members in the times of need.

Stamina. Zebras are very enduring animals which possess a lot of stamina. They can run a long time and escape from a predator chasing after it. This totem animal teaches you to never give up and use all your forces to go after your goals. It encourages you to trust your strength and ability to achieve success.

Zebra as Your Totem Animal

If the zebra is your totem animal, you are most likely a very sociable person. You enjoy participating in teams and groups, and enjoy cooperating with others to achieve your goals.

You are most likely a balanced and stable person. You are not afraid of challenges and you joyfully embrace them.

You are a unique individual. There is something special about you that distinguishes you from others people. That might be your beliefs or understanding of the world around.

You know that every story has two sides, a black and a white one, and you don’t take one side. You try to see the picture from all angles.

What if the Zebra Appears in Your Life?

The zebra could also be calling you to maintain your freedom and independence.

It could be a reminder not to be one sided when approaching to things and problems. You need to embrace some new viewpoints and ideas and be open for changes. You also need to be open to new ways of solving your problems. Things can never be one sided; keep in mind that.

The zebra is asking you to establish balance and harmony in your life. It reminds you to accept yourself and your uniqueness with joy and appreciation.

When to call on Zebra?

You should call on Zebra as your spirit animal when:

Dreams about Zebra – Interpretation and Meaning

Zebras in a dream could symbolize the duality which is present in your life.

If you dreamed of zebras in a herd, your dream could be asking you to establish balance in some areas of your life. If the zebra in your dream was tamed that could indicate some surprising gains.

Sometimes this dream indicates someone’s attempt to ruin your reputation.

If you dreamed of a zebra hunt, your dream could indicate some negative influence or people you need to get rid of. That person could be someone close to you or a coworker.

A dream about zebras could be a calling to make some changes or to adapt to some changes happening in your life. It is asking you to maintain flexible and go with the flow.

Try to see the positive in the changes and how they will affect your life for the better.

This dream could also indicate the need to find solutions to some problems you have, possibly at work. Maybe you will have to rely on team efforts to find the solution.